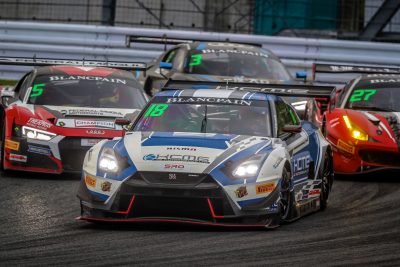 The KCMG Nissan GT-R NISMO GT3 squad enters the final round of the Blancpain GT Series Asia at Ningbo International Speedpark, China this weekend still in the title fight.

The Ningbo circuit joins the championship for the first time after opening in August last year.

With two races and 25 points on offer for a race victory, Edoardo Liberati, Florian Strauss, and Yukinori Taniguchi remain in championship contention.

Taniguchi is only 10 points off the lead in the Pro-Am championship in second place. He will again be joined this weekend by Alexandre Imperatori.

KCMG will also be looking to cement its position in third place in the team’s championship.

Running the newly-evolved 2018-spec Nissan GT-R NISMO GT3, the KCMG squad has been a strong contender throughout this year’s championship with an overall win for Taniguchi and Imperatori at Fuji and three podiums for Liberati and Strauss.

Nissan power will also be in action in the latest round of the FIA World Endurance Championship this weekend at Fuji International Speedway in Japan.

The ByKolles LMP1 team will contest the six-hour event with Oliver Webb, Tom Dillman and James Rossiter on its driving roster.

Fuji will be the penultimate round of 2018 with Shanghai, China to follow on November 18. The 2018/19 FIA WEC “Super Season” will then return on in March next year in the US at Sebring.

The Nissan-powered ESM team will seek to repeat its Petit Le Mans win this week in the find round of the IMSA WeatherTech SportsCar Championship – Petit Le Mans at Road Atlanta.

Last year, the No. 2 regular-season lineup of Ryan Dalziel and Scott Sharp were joined by Brendon Hartley on the top step of the podium at the end of the 10-hour race.

The No. 22 car of Pipo Derani, Johannes van Overbeek and Bruno Senna finished just off the podium in fourth.

The team carries momentum into the weekend’s event with the No. 22 taking victory at the previous round at WeatherTech Raceway Laguna Seca.

In addition, the No. 22 team, with Petit Le Mans teammate Timo Bernhard, has extra motivation to win, with Johannes van Overbeek announcing he will retire from professional racing at the end of the season.

“As this is the last race of my professional career, I’m eager to enjoy and take in the entire experience,” he said.

“I can only hope we are as competitive this year as we were last year.”

While van Overbeek has long been a part of the American sportscar scene, another driver will make their US debut with the ESM team. Frenchman Norman Nato will join Dalziel and Sharp in the No. 2 at Road Atlanta.

“It’s always a nice feeling to be racing in one of the biggest races in the US, but it’s even nicer knowing that you are doing it with a winning team,” Nato said.

“It’s the first time for me racing in the US, but this year has been really successful for me in Europe, and it gives me a lot of confidence to be straight away in the pace of the front-runners.”

Three of the Nissan Motorsport machines made it to the end of 161 laps around the grueling mountain circuit. Two-time Bathurst winner, Rick Kelly, and co-driver Garry Jacobson led the charge for Nissan with a P11 finish.

Swiss racer Simona De Silvestro (teamed with Alex Rullo) tied her previous best Bathurst finish of P14. The No. 78 pairing started P26 and made up an impressive 12 places over the course of the race.

“That was a lot of fun. We had really good pace throughout the race, and Alex did an awesome job,” De Silvestro said.

“The car didn’t want to leave the pits after the last two stops, so we lost a bunch of time and probably would have finished just behind Rick.

“We recovered well with good speed. I’m really happy with the pace we had in the race.”

Andre Heimgartner and Aaren Russell finished not far behind the De Silvestro/Rullo car in 16th place.

The fourth car in the Nissan stable, Michael Caruso and Dean Fiore’s No. 23 faced an early retirement in the race. A brake bias adjuster was knocked during the pair’s first driver change, provoking an incident that caused significant damage to the car.

Ultimately, the car was retired with an engine issue after 69 laps.

The Supercars Championship next heads to the Vodafone Gold Coast 600, the third and final round of the Enduro Cup.