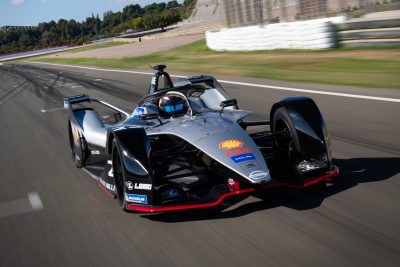 Nissan e.dams has its sights set on its ABB FIA Formula E race debut after a successful preseason test last week in Valencia.

The team completed 247 laps across the three-day test in preparation for the first race of the season in Ad Diriyah, Saudi Arabia on December 15.

Nissan will become the first ever Japanese manufacturer to contest the all-electric street racing championship when the series debuts its new “Gen 2” electric racecar in season five.

The all-new car features new battery, powertrain, and aerodynamics with the new machines now completing the entire race without the mid-race car swap that was used in previous seasons.

The full season five calendar has now been confirmed with Santiago, Chile, and Bern, Switzerland the final races to be confirmed.

The Chilean race will fill the spot previously marked as TBA for January 26 next year while the new event in the Swiss capital is scheduled as the penultimate round for June 22.

In total, the Nissan e.dams team will contest 13 races over 12 race weekends with the season finishing in New York with a double-header weekend.

A new “performance side” of Nissan Intelligent Mobility – the company’s vision for changing how cars are powered, driven and integrated into society – will be shown across the globe throughout Nissan e.dams’ debut season.

With more than 365,000 Nissan LEAF vehicles sold around the world since its debut in 2010, Nissan is using its experience building electric vehicles for the road to develop the all-new powertrain for its Formula E race car.

Sebastien Buemi put Nissan e.dams at the top of the timesheet for the first time during the first Wednesday afternoon session in last week’s test. His third fastest time in Wednesday’s final session put Nissan as the fourth-fastest manufacturer for the week.

The Nissan Super GT GT-Rs finished in the top 10 in both the GT500 and GT300 classes as the series made their annual trip to Autopolis in the south of Japan.

In the GT500 class, it was the No. 24 Forum Engineering car of JP De Oliviera and Mitsunori Takaboshi leading the charge. De Oliviera started the race in the 13th position. Despite losing a couple of positions early in the race, the Brazilian driver recovered to the duo’s starting position by the time he handed the car over to Takaboshi on lap 31.

Thanks to quick pit work by the team, Takaboshi cycled up to ninth after stops were completed. The Japanese driver went on a charge through the field, taking the chequered flag in seventh place.

“The team’s work in the pits was really fast and that enabled us to return to the track in front of the other two GT-Rs. The tires also warmed up well,” Takaboshi said.

“I was able to raise our position in the midst of the chaos and the run at my own pace. Starting from the rear, although we weren’t able to make it to the top, I think we carried out the best race that we could have. I will do everything I can to display a good performance at Motegi as well.”

The No. 12 of Jann Mardenborough and Daiki Sasaki finished P11 after a pit stop issue, just ahead of the No. 2 in P13. Ronnie Quintarelli and Tsugio Matsuda finished P15 after their late-race charge was halted by a penalty.

In GT300, the No. 11 Gainer machine led the charge, finishing sixth after running much of the race in podium contention.

Super GT next heads to Twin Ring Motegi for the 2018 season finale.

The severity of the rain forced the race to be deemed a non-event with no points awarded.

The No. 7 Nissan of Heimgartner and Russell were placed third at the time of the event being called off.

With their co-drivers starting the race, neither Simona De Silvestro nor Michael Caruso completed any racing laps as the weather arrived before they had a chance to to take over their respective Nissan Altimes.

Rick Kelly was in a similar position having only driven around behind the Safety Car. Garry Jacobson was in second place when he pitted to hand over to Kelly.

“It is what it is – a bit of a non-event,” said Heimgartner.

“I started the race, passed a lot of cars, that was the only positive. It’s just really disappointing not to have a result when we finished the race third on the time sheets.”

The penultimate round of the Supercars Championship will be held in New Zealand at Pukekohe Park Raceway in two weeks time.