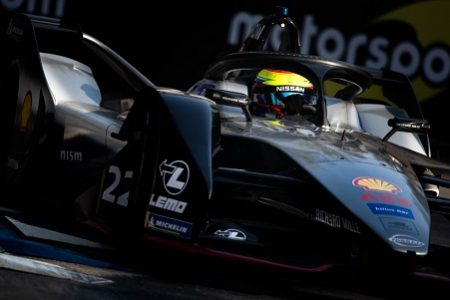 Rowland actually held the fastest time of the day until the dying moments of the second session.

Former series champion Sebastien Buemi was a busy man in the afternoon, recording 43 laps in testing – more than any of the other full-season drivers taking place in today’s test.

In total, the team completed 115 valuable development laps as they prepared for the second round of the series of Marrakesh, Morocco on January 12.

“The most important thing was getting more laps under my belt, but it was very pleasing to be towards the top of the timesheet,” Rowland said.

“We missed a lot of running with the weather delays yesterday, so it was great to get plenty of miles in the dry. We gathered a lot of valuable data which will be very valuable for the Nissan e.dams team in preparation for the next round of the championship in Marrakesh.

“I’m really starting to feel comfortable in the car now and can push harder and harder. I can’t wait to get back on board for the next race.”

Nissan became Formula E’s newest manufacturer this weekend and the first ever Japanese brand when it made its debut this weekend. The 13-race, 12-city global schedule will be used by Nissan to showcase the performance side of Nissan Intelligent Mobility – the brand’s vision for how cars are driven, powered and integrated into society.

Nissan joined forces with the other 10 ABB FIA Formula E teams in giving female racers a chance to sample the electric power of the global street racing championship in testing on Sunday.

The test for the female drivers was instigated by the Ad Diriyah event promoter with Nissan actually having two female racers line for Nissan e.dams

At the conclusion of testing local 19-year-old female karter Reem Al-Aboud also got the chance to sample the Nissan Formula E car.

Both drivers prepared for the opportunity today with simulator sessions at the Nissan e.dams headquarters in Le Mans, France.

More drivers will get to climb aboard the machines normally driven by Sebastien Buemi and Oliver Rowland at the next event in Marrakesh.

After the Saturday race on January 12, the annual Formula E rookie test will take place on Sunday. Test and reserve driver Mitsunori Takaboshi will be joined aboard the Nissan e.dams Formula E cars by simulator driver Jann Mardenborough.