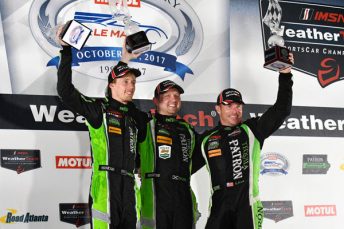 Road Atlanta, Braselton, GA, USA – Nissan has finished the 2017 IMSA WeatherTech SportsCar Championship on a high note with victory in the final race of the season at the Motul Petit Le Mans at Road Atlanta.

Scott Sharp, Brendon Hartley and Ryan Dalziel took the win after the ESM team dominated the 10-hour event. The Nissan entries qualified second and third and battled with the Penske Racing team, which made its debut in preparation for its full-time return in 2018.

Issues for Penske enabled ESM to take control and, in the closing stages of the race, it was looking like the team was set to clinch a 1-2 finish with the No.22 Nissan Onroak entry of Johannes van Overbeek, Pipo Derani and Bruno Senna holding the lead.

A late race drive-through penalty for contact sadly pushed the No.22 off the podium back to fourth place, but Hartley was able to take the win in only his second drive for the team.

The race-winning Nissan Onroak DPi also had a small delay with an alternator issue late in the race, but quick work by the crew put the No. 2 entry back in contention for the race win.

“When we lost the lead in the pits from the alternator issue, I thought the race was over,” Dalziel said.

“Sometimes things are meant to work for you, and today was one of those days. The No. 2 definitely car needed it. I’m bummed we didn’t get a 1-2 finish.

“For sure the team earned it. Overall, this was a great way to end the season for Nissan NISMO, Ed Brown, and the whole team. We’re going to enjoy this one until Daytona.”

Nissan’s first season in IMSA competition proved highly successful with the team taking two victories and the No. 2 and No. 22 entries finishing fifth and sixth in the team championship.

All four lead drivers, Sharp, Dalziel, Derani and van Overbeek, have re-signed to return for the 2018 season which will kick off at the “Roar Before the 24” test in Daytona in January.

Nissan also took victory in the Continental Tire Sportscar Challenge on Friday at Petit Le Mans with Owen Trinkler and Sarah Cattaneo claiming victory in the ST class with their Nissan Altima.

Chang International Circuit, Buriram, Thailand – GT Academy winner Jann Mardenborough starred in the latest round of the Super GT Championship but sadly came away without his first GT500 podium in the series’ annual visit to Thailand.

The Welshman excelled in qualifying to put his Calsonic Nissan GT-R NISMO GT500 on the front row.

Mardenborough started the race in wet conditions, chasing his flat-mate and rival Nick Cassidy for the lead.

On the last flying lap before his stop, Mardenborough set the fastest lap of the race – more than 2/10ths of a second faster than the entire GT500 field.

Hiro Yasuda took over and looked set to claim the first podium of the season for the Calsonic machine when they suffered a fuel system issue with three laps remaining and were forced out of the race.

Ronnie Quintarelli and Tsugio Matsuda took a ninth-place finish in Thailand after electing to start on slick tyres at the start of the race.

“It took about five laps for the road surface to dry but after it did the tyres gripped really well,” Quintarelli said.

“I’m glad we could make it through that rough beginning to the race and come back to finish in ninth.

“Ultimately, we wanted to get some points and I think the two points we got today were really essential. We will be heading into Motegi with an eight-point difference to the leader and the potential to take the championship.

“We’ve been able to earn points in every race this season, but we are yet to take a win. To begin with, we will be aiming for a victory and won’t stop fighting until the end.”

Satoshi Motoyama and Katsumasa Chiyo finished 10th in Thailand with Daiki Sasaki and JP de Oliveira suffering an early delay with a driveline issue at the start. The Brazillian/Japanese combination rejoined the race 32 laps behind but completed a race finish.

The final round of the Super GT Championship will be held at Twin-Ring Motegi on November 12 and shown live on NISMO.tv

Mount Panorama, Bathurst NSW, Australia – Nissan Motorsport has finished the dramatic 2017 Bathurst 1000 with a pair of top 10 finishes and plenty of promise for the remainder of the of the Supercars season.

Michael Caruso and Dean Fiore led home the Nissan team with the No. 23 Nissan NISMO duo crossing the line in sixth place.

Rain fell before the green flag and remained for much of the day at Mount Panorama. Caruso and Fiore’s finish was their best ever as a pairing and impressive considering they suffered a failed windscreen wiper in the continuing rain.

The No. 20 carsales Racing entry of Todd Kelly and Jack Le Brocq fought back from being a lap down to remarkably finish just behind their teammates in seventh. Starting his 20th Bathurst 1000, Kelly and his teammate Le Brocq excelled late in the race to get back on the lead lap and crack the top 10.

Rick Kelly and David Wall had shown strong pace all day in the No. 15 Sengled Racing Altima but Kelly slid wide and into the sand trap on lap 134. He was pulled out and able to continue, crossing the line in 13th place.

Simona De Silvestro and David Russell suffered a heartbreaking finish to the race. Despite only qualifying 23rd, the No. 78 Altima was the leading Nissan for much of the race.

Heading into the final seven laps of the 161-lap event, De Silvestro made contact with the wall at the final turn after she was set to complete a top eight race finish.

“Early on we lost our wiper and that made things really challenging. Deano did a fantastic job in such difficult conditions,” Fiore said.

“We were running 15th and tried an alternative strategy, which looked really good. We risked it and things were looking great.

“But a few safety cars put everyone back on the same strategy. So to finish sixth is really rewarding, having been around the top 10 for most of the weekend. A stellar effort from the entire garage this weekend too. There were so many hands helping each other out. It was great to see.”