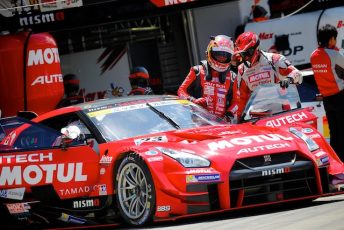 Suzuka Circuit, Japan – After finishing second in the past two Super GT rounds, Nissan has its sights set on success at this weekend’s Suzuka 1000km – the final time the GT500 machines will be part of the event.

Satoshi Motoyama and Katsumasa Chiyo finished second at Sugo on July 23 and Ronnie Quintarelli and Tsugio Matsuda took the runner-up spot at Fuji International Speedway on August 6. Quintarelli and Matsuda are currently fifth in the 2017 points – but only three points off the lead in a tightly contested battle.

Motoyama finished on the podium here at Suzuka last year with Mitsunori Takaboshi filling in for the injured Chiyo.

For next season Suzuka will host a 300km race for the Super GT Championship with the Suzuka 1000km evolving into a stand-alone 10 hour race for GT3/GT300 spec cars.

First held in 1966, Nissan took its first win in the event in 1970 with Kawakami Nishino and Koji Fujita. Further wins have been earned by Nissan in 1973 (Kunimitsu Takahashi and Kenji Tohira), 1990 (Kazuyoshi Hoshino and Toshio Suzuki), 1993 (Takao Wada and Toshio Suzuki) 2006 (Benoît Tréluyer, Kazuki Hoshino and Jérémie Dufour), 2008 (Tsugio Matsuda and Sébastien Philippe) and 2012 (Masataka Yanagida and Ronnie Quintarelli)

Former GT Academy winner Jann Mardenborough will race a GT500 at Suzuka for the first time this weekend. The Welshmen enters this weekend with teammate Hiro Yasuda after finishing fifth at Fuji.

“Suzuka is one of the old school circuits and the track hasn’t been altered since its original design,” Mardenborough said.

“Sector one is great. Turn one is so fast! The entry speed with a GT500 car is so fast in turns one and two.

“Sector two through 130R is also fun, especially working through traffic with the GT300s.

“We finished fifth which was a good result. We’re not where we need to be but we’re getting closer.”

This weekend’s race at Suzuka will again be steamed live on-line with English commentary from NISMO TV’s Sam Collins and GT Academy mentor, Rob Barff. The race will start at 12:30pm local time on Sunday, August 27 / 5:30am EU time / 4:30am UK time and Saturday, August 26 at 11:30pm on the US East Coast and 8:30pm on the US West Coast. Watch at live.NISMO.tv

Caruso finished seventh in Sunday’s 200km race, backing up his sixth placed result on Saturday. The No. 23 Nissan NISMO-branded Altima also topped the times in two of the practice sessions earlier in the weekend.

Caruso’s consistency over the weekend gave him fourth place overall.

“We finished the weekend fourth on points overall, so that is a big positive for us,” Caruso said.

“When you look at the weekend as a whole, that’s considerably better than what we’ve been able to achieve in previous rounds.

“Overall, good progression and let’s hope we carry this for the next three events. The year has presented its challenges, so to leave Bathurst, Sandown or Gold Coast with a good result would be ideal.”

Todd Kelly pulled off a top ten result on Sunday but his brother Rick was not as fortunate – a blown tire causing severe damage to the car. Simona de Silvestro’s Sunday assault was ruined by a drive-through penalty for engaging the pit lane limiter too early following her pit stop.

The next Supercars round will be the Sandown 500 on September 16-17.