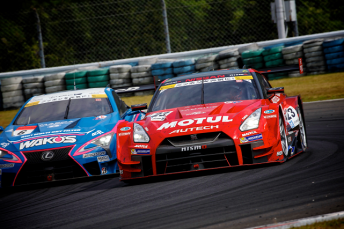 Veteran Satoshi Motoyama starred for Nissan in qualifying when he put the No.46 S Road CRAFTSPORTS GT-R on the front row of the grid in second place. He and teammate Katsumasa Chiyo battled strongly throughout the race to just miss out on a podium in fourth place.

Starting from 11th on the grid, the No.23 Motul Autech GT-R had Ronnie Quintarelli at the wheel for the first stint and he stayed out later than any other top running competitor before pitting at lap 40 to hand the wheel over to Tsugio Matsuda.

Matsuda continued the charge and finished the race right on the tail of Chiyo in fifth place – part of a line of four cars that were battling for second place overall.

The No.12 Calsonic Impul GT-R (Hironobu Yasuda / Jann Mardenborough) and the No.24 Forum Engineering Advan GT-R (Daiki Sasaki / Joao Paulo de Oliveira) both had strong races – rising from ninth and 14th on the grid to finish seventh and ninth respectively.

“For about the last 20 laps I was fighting it out but the No.100 managed to stay in front of me, which was pretty frustrating,” Chiyo said.

“The yellow flags came out and although I aimed for my one chance to get through at the first corner, I couldn’t hold onto the position.

“It’s really disappointing to think that we were so close to a podium finish. However, we’ve clearly built up a car that is competitive, which I’m really appreciative of.”

Sanchez hopes for better fortunes and weather in World Challenge

Canadian Tire Motorsport Park, Bowmanville, ON, Canada: Former GT Academy winner Ricardo Sanchez has his sights set on a dry weekend and better luck as the Pirelli World Challenge Championship heads for the second part of its back-to-back SprintX weekends.

The SprintX championship heads to Lime Rock Park in Connecticut this weekend as the Always Evolving / AIM Autosport Nissan GT-R NISMO GT3 team looks to rebound from last weekend’s battle at Canadian Tire Motorsport Park near Toronto in Canada.
Sanchez and Frankie Montecalvo looked strong for an impressive result on Saturday until being struck with a penalty. Their chance to make amends on Sunday was ruined by torrential rain which forced the postponement of the race until later this year.

“We were on pole for the first race and sixth overall,” Sanchez said.

“In the race on Saturday we were leading the first half an hour, until the safety car pulled out and then we got a penalty as well. This made our first race very difficult and we finished fourth in class, 14th overall.

“I managed to do a quick lap in my stint that put us second in class and sixth overall for the second race. But weather conditions were not good, it was raining a lot and we couldn’t race anymore, so the race got postponed until later in the year.

“Now we’re setting our sights on Lime Rock Park this weekend and hoping for some dry weather. We will see what we can do, Lime Rock is a really tight track and there is no rest at all – I’m looking forward to it.”

2016 Rookie of the Year, Stéfan Gauthier earned the pole position for both races, but got tangled up in a race one, lap one altercation with Brian Makse, leaving the door open for Isabelle to take his first series win. Kevin King and Keishi Ayukai rounded out the race one podium.

For race two run, Stéfan Gauthier was penalised for his part in the previous day’s incident, leaving Xavier Coupal to start from the pole as the drivers did battle in teaming rain.

Similar to Saturday’s race, Isabelle took over the lead shortly before the midway point, putting himself in position to claim his second win of the weekend.

Spectators at this weekend’s events at Canadian Tire Motorsport Park included 67 Nissan Micra owners – Nissan Canada arranging for all owners of the road-going version of the Micra to get free entry for every race in the championship in 2017.

The Micra Cup Championship will now head to Circuit Mont Tremblant in Quebec for rounds three and four of the series this weekend from May 26-28.