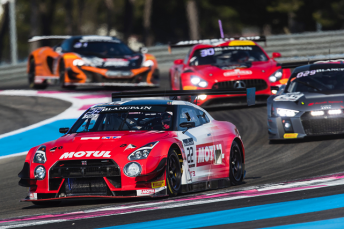 Spa-Francorchamps, Belgium: Following on from the team’s top five finish at Circuit Paul Ricard in the Blancpain GT Series Endurance Cup, Motul Team RJN now heads to Belgium to begin preparations for the longest race of the season.

“Any day you get to drive around Spa-Francorchamps is not a bad day at the office – especially on board the Nissan GT-R NISMO GT3,” NISMO athlete, Alex Buncombe said.

“We had a really strong race at Paul Ricard and everyone at Motul Team RJN is really looking forward to the test.

“It is an important part of our preparation for the 24 Hour later this month. While the test doesn’t give you an insight as to what the place is like at 3:00am in the morning when its raining, there are still lots of lessons to be learned.

“We’ve made some great strides with the car this year and I’m looking forward to working on our package in Belgium.”

Buncombe will join his regular teammates Lucas Ordóñez and Katsumasa Chiyo aboard the No.23 entry with Matt Parry, Struan Moore and Matt Simmons in the No.22 for Motul Team RJN.

Townsville, Queensland, Australia: Nissan Motorsports heads to the Townsville street circuit in Queensland this weekend in a positive frame of mind after showing a strong turn of speed in Darwin.

Rick Kelly scored the pole for the first race in Darwin and will be hoping for more this weekend as he debuts a brand-new Nissan Altima. Kelly, his brother Rick, Michael Caruso and Simona de Silvestro will do battle at the Queensland circuit which winds through Reid Park.

“It is great to go back to the streets in Townsville as it is a fantastic little track,” Caruso said.

“We get great support from everyone in that town and you get a lot of fans traveling up to Queensland as well. The weather is going to be brilliant as usual.

“We’re expecting to start moving forward as we’ve found some little things in the break after Darwin and hopefully we can get the car back up where it belongs.

“Rick’s qualifying speed in Darwin was great and that is the key to this game in qualifying. If we can get up to the front we can race well and then everything will sort itself out from there.”

Canada challenge next for ESM after Watkins Glen speed

The championship has its first back-to-back weekend schedule of the year with Canadian Tire Motorsport Park a mere 300 miles away.

Located near Toronto, the Canadian circuit has the fastest average speed of any track on the schedule.

While the ESM team struck trouble at Watkins Glen, the outright speed demonstrated was impressive. Both the No.2 and No.22 cars led the race and Pipo Derani qualified on pole.

The ESM team not only showed speed on the track, they were equally as swift in the pits. After Scott Sharp was pushed off track in the sweeping turn one, the team quickly returned the car to the track despite a heavy impact with the tyre wall.

“Wow. What a crazy change of events during the day,” Sharp said.

“In so many ways, it was a great weekend that we desperately needed. We stepped up in performance, and showed what we can do.

“We were competitive in practice, put the car on pole, led the early part of the race and both cars were strong. The team did a fantastic job and it all went away for a variety of reasons.”