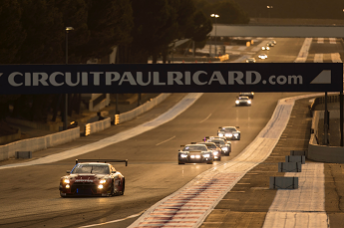 The teams of the Blancpain GT Championship Endurance Cup were treated to blistering heat all weekend in the south of France.

The team even installed a temporary “pool” in the paddock for the drivers to cool off between stints.

While both Nissan GT-Rs were disappointed after qualifying, the No. 23 entry of factory aces Ordóñez/Buncombe/Chiyo and the No. 22 car of Matt Simmons, Matt Parry and Struan Moore impressed in the race.

The No. 22 machine qualified 25th and actually fell back early before beginning its march forward. The No. 23 machine kicked off from 32nd on the grid and stayed well in contention in the top ten by nightfall.

Simmons, Parry and Moore just missed out on a top 10 finish by crossing the line in 11th place. Former Nissan GT Academy winner Simmons completing the most impressive weekend yet of his Blancpain GT career.

The No. 23 Nissan GT-R NISMO was in a fierce late race podium battle before finishing fifth – the same result the team scored in 2016.

“After starting 32nd we really didn’t think we’d be near the podium but to end up fighting hard in fifth is a fantastic result. It is our first points of the year and this was great preparation for the Spa-Francorchamps 24 hours which is the big race of the season.

“Our pace was fantastic and I had great fun in both my stints – one during the day and one at night. We lost a little bit of time during one of the stops but the entire team did an amazing job.

“The Nissan GT-R NISMO GT3 was fast throughout the whole race and it is brilliant to finish with a top five.”

The 3.4 mile circuit in upstate New York is the former home of the US Formula 1 Grand Prix.

Watkins Glen also joins the Rolex 24 at Daytona, 12 Hours of Sebring and Petit Le Mans as part of the North American Endurance Cup.

The ESM team will expand to a three driver line-up for Watkins Glen with Pipo Derani lining up aboard the No.2 Nissan Onroak with Scott Sharp and Ryan Dalziel, and Bruno Senna driving with Johannes van Overbeek and Ed Brown in the No.22.

“Watkins Glen is the polar opposite to Detroit, being a fast and smooth race track where we feel our Nissan DPi chassis and engine will work much better,” Dalziel said.

“This program has been moving forward massively behind the scenes since January and we know that first win is not far away. Im looking forward to having Pipo back with us, and hopefully bringing some luck with him.

“Watkins Glen Six hour is such a fantastic race and the one endurance race I’ve never managed to win, so I’m looking to check that box off on Sunday.”

Action kicks off at Watkins Glen on Friday with the first practice session. Qualifying is scheduled for 12:55pm (local time) on Saturday with Sunday’s six-hour battle getting the green flag at 10:10am.