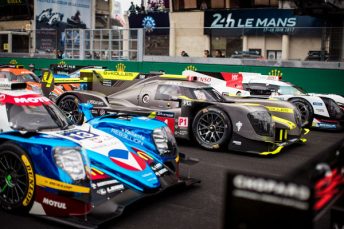 Le Mans, France: Nissan power will return to the Circuit de la Sarthe next week for both the 24 Hours of Le Mans and the Road to Le Mans support race.

LM P1 squad ByKolles will contest next week’s endurance classic powered by the Turbo 3.0 liter VRX30A evo engine. The team prepared for Le Mans last Sunday at the annual test day where they completed 68 laps with Oliver Webb, Marco Bonanomi and Dominik Kraihamer at the wheel

As the sole engine supplier for the LM P3 class, Nissan and NISMO will also be in action in Road to Le Mans event which features GT3 cars.

The Road to Le Mans will include a pair of 55 minute races, one on Thursday and the final on Saturday at 11:30am, prior to the 24 Hours.

Detroit, MI, USA – The Nissan-powered ESM squad has its sights set on the sweeping turns of Watkins Glen after a tough battle on the streets of Belle Isle in Detroit last weekend.

After a shortened qualifying session which was red flagged before many of the prototype entires had recorded a representative lap, both ESM cars fought hard in the race. The Johannes van Overbeek/Ed Brown No. 22 was running fourth late in the race before they had to make a late stop for fuel.

The No. 2 entry of Scott Sharp and Ryan Dalziel suffered a rear end failure with only 10 minutes remaining – a victim of the bumpy Belle Isle circuit.

“We showed in Long Beach how good our Patrón ESM Nissan DPi was on street courses so we are really looking for good things there.

“The No. 22 Tequila Patrón ESM guys did about as good as we could have done today,” van Overbeek said.

“The strategy, set up, pit stops, driver change, and Ed’s stint were all spot on. Towards the end we we’re running a competitive fourth but hoping for a yellow that never came. In the end, we had to stop for fuel which shuffled us back to seventh place in the end.”

The next round of the championship will be the Watkins Glen Six-Hour on July 2.