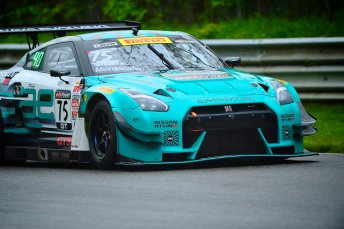 Paired with Frankie Montecalvo aboard the Always Evolving / AIM Autosport Nissan GT-R NISMO GT3, the duo scored second place in Friday’s first race and then backed that up with a brilliant fightback from an early pit stop to again claim the runner-up prize in Saturday’s event.

A turn-one, lap-one crash between the leaders in race two had left the Lime Rock track littered with debris and while Sanchez was able to avoid the carnage, he collected a large piece of tire debris in the radiator intake.

The Mexican ace had to come into the pits early to remove the debris, but then began a brilliant comeback drive from last place. Montecalvo continued the charge after the scheduled driver change pit stop at half distance – pushing the young stars back into second place again in the Pro/AM class.

“It was an amazing effort from the team. Always Evolving gave us a better setup today. We were a little unlucky at the start, we had to pit and take off some debris,” Sanchez said.

“So, from last position we ended up P2 in class. Frankie did an amazing job, and the Nissan GT-R was really strong.

“We pulled out the result and I’m really happy to collect some points and a podium – we’re ready to fight for a win at the next one.”

The pair currently sit in fifth place in the Pro/Am points. They will be back in the car on August 11-13 for the next round of the SprintX championship at the Utah Motorsport Campus.

Opening round dual-winner Jean-Michel Isabelle scored pole position for the first race but a clash between he and Coupal took him out of contention. Valérie Limoges took the lead halfway through the race but 2015 series champion Bédard was able to take the win from Kevin King and Limoges.

2016 champion Coupal started on pole for Sunday’s race and took his first victory of the year over Bédard and Limoges – the three Micra Cup drivers are actually all part of the same team.

The Nissan Micra Cup championship will return to Circuit Mont-Tremblant for the third race weekend of the season from July 21 to 23. Prior to that, a discovery day will be held for fans at Quebec’s Circuit ICAR on June 18.

American driver Scott Sharp and Scottish ace Ryan Dalziel held the lead late into the race on the streets of Long Beach before finishing second.

The duo are looking to replicate that performance this weekend in Detroit aboard the No. 2 Nissan DPi.

“We showed in Long Beach how good our Patrón ESM Nissan DPi was on street courses so we are really looking for good things there.

“This is still a new program but we feel we are closing the gap to the Cadillacs quickly. It will be tough to beat them on home turf but will be extremely gratifying if we can.”

Johannes van Overbeek and Ed Brown return aboard the No. 22 entry. The pair will be looking to replicate van Overbeek’s qualifying performance at Circuit of The Americas when he put the Nissan-powered machine on the front row.