Ninth in Pro-Am for Caygill during Paul Ricard Six-Hour

Ninth in Pro-Am for Caygill during Paul Ricard Six-Hour 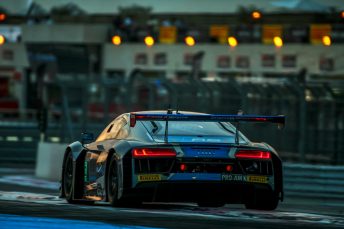 Marking the biggest challenge to-date of his maiden season in the hugely competitive championship, the Netherton 27-year-old relished the prospect of the six-hour contest on Saturday evening and performed well alongside regular team-mate Jon Venter and stand-in driver Hugo De Sadeleer.

Running in the Pro-Am class this weekend rather than the Pro category as a result of De Sadeleer’s arrival at the team to replace Niki Mayr-Melnhof, who had a clashing motorsport commitment, the No.3 Audi R8 LMS entry raced through from 17th position in class to ninth at the conclusion.

“I’m happy with how the race went really, I held my own and it was good overall”, said Caygill, “I know I need to find a bit more pace, but that’s all down to time in the car. We’re making good progress, I drove my own race and gained some fantastic experience. At one stage we were running quite well in Pro-Am and with guys like Jonny Adam in there, you know how competitive it is.”

With a very long evening ahead on Saturday from 17th on the grid in Pro-Am and 54th position overall, the trio fought through impressively with Australian racer Venter taking the opening stint which got underway at 18.00 (local time).

Having risen strongly into ninth in Pro-Am by the end of the first hour, and climbing as high as third in class in hour two, Venter and De Sadeleer both undertook stints before Caygill had his opportunity at the halfway point of the race.

An unfortunate drive-through penalty, applied due to an infringement in one of the pit-stops, did impact the squad’s placing before Caygill climbed aboard the Audi for his two-hour stint but the Yorkshire driver produced a very competitive showing.

As the night skies darkened over Le Castellet, Caygill maintained superb concentration and enjoyed the action, even though his drinks bottle ran out during the second half of his run, before going on to end the lengthy two-hour stint eighth in Pro-Am.

Venter got back behind the wheel for the final 60 minutes of action and the No.3 car went on to secure ninth in class and 25th overall which marked a huge improvement of eight places in Pro-Am and 29 positions overall on their starting slot.

Reflecting on the race, Caygill said: “I felt more comfortable during the night, it takes a lot of concentration but it’s more peaceful almost. You can see the leaders a long time before they reach you, with the headlights, so it’s easier to plan where you can let them by without compromising your own race. In the daylight, sometimes you don’t see them until they’re right on your gearbox.

“I was consistent through my double stint and fitness wasn’t an issue at all. Two hours in the car is hard work and it’s pretty intense in GT3, it’s such a high level and you push as hard as you can for the full two hours – it’s as if you’re on a qualifying lap every lap. I really enjoyed it out there and this has been great preparation ahead of Spa. That’ll be an eye-opener for sure!”

Next on the Blancpain Endurance Cup calendar is the biggest race of the season, the Total 24 Hours of Spa over the weekend 29th/30th July. One of the most prestigious events in global motorsport, the visit to Belgian track Spa-Francorchamps will mark Caygill’s first ever twice-round-the-clock race at the wheel of a GT3 car. There will be an official test day at Spa on Tuesday, 4th July.