Nikki Hepburn’s Had A Make-Over

Nikki Hepburn’s Had A Make-Over 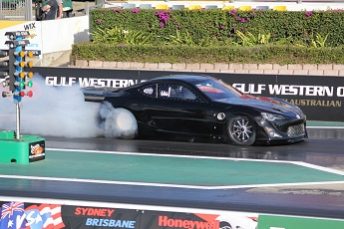 Nikki Hepburn debuted a new look, lighter version of her World Record holding Radial Toyota 86 on the second day of the Winter’s Warm-Up event at Willowbank Raceway in Queensland.

Nikki’s “world dominating rocket” has had a nose job, been on a “crash diet” and has never looked better! The Toyota 86 looked a million dollars when it rolled out of the trailer on the second day of the Winter’s Warm-Up event on the weekend.

After countless hours working through the rebuild and awesome efforts by so many people, Nikki and partner Luke rolled through the Willowbank gates late Sunday morning and wasted no time in hitting the track with the newly rebuilt 86.

To get a handle on the new front-end set-up, a new bigger Garrett Gen2 98mm Turbo and a few other little upgrades saw the team make a planned early shut-off pass which yielded a 60 foot time of just two hundredths of a second off Nikki’s previous PB time. The team were very happy with the test pass and are extremely excited about running the car in the Factory Extreme class at this coming weekend’s Gulf Western Oil 50th Australian Winternationals. They’re now chasing that 6 second time card.

Follow Boosted 86 Racing and Nikki’s performance and progress on the Team’s Social channels: