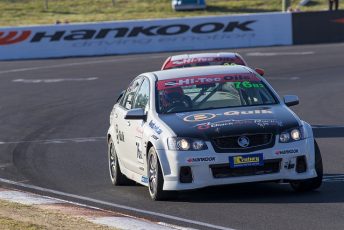 Troy Williams will be joined in driving duties for the #76 TW Motorsport Holden Commodore SSV Redline at this weekend’s Australian Production Cars round at Queensland Raceway by crew member turned racer, Jeff Nielsen.

Nielsen has been friends with Williams for a number of years, and after crewing for Williams at the 2017 Hi-Tec Oils Bathurst 6 Hour – which doubled as round one of the 2017 APC season – he was inspired to step up to the national production car racing category.

“I am looking forward to the challenge of running at night – a first for me – and also to racing alongside Jeff Nielsen, a crew member and friend of mine,” Williams said.

“He crewed for me at Bathurst and races sports sedans in a Torana, but after seeing us in action at the 12 Hour and watching the APC with interest, he is super keen to step up and have ago himself.

“At the same time, it works for me because apparently there is a Hogs Breath voucher on offer for having the most co-drivers in a season, and I want that steak!” laughed Williams.

For Nielsen, the weekend is one he has been looking forward to since deciding to make the step up to the APC.

“I am really excited to make my APC debut with Troy,” said Nielsen.

“I will be going from changing tyres and refueling to driving – I can’t wait.

“Troy and I have been friends for a few years now with us both racing historic cars, so it will be cool to share a car. Although I have done a twilight event at Sydney Motorsport Park before, neither myself or Troy have raced at night so we will have to learn on the run!

“It is also my first time driving at Queensland Raceway, so I will be working hard to make sure I can have the same pace in the Commodore as Troy so hopefully we can be at the pointy end of the B2 class and Troy can get some good points for the championship.

“The APC is a great category. The different classes remind me of Bathurst in the 70s and 80s, and racing at night this weekend should be interesting and add in a few extra challenges! At the end of the day, my main aim is to have a good weekend and bring the Commodore home in one piece for Troy and the whole team.”

Williams and Nielsen will be one of a 25-plus field of cars taking part in round four of the 2017 APC at Queensland Raceway across August 4-6, with the event to feature two x 300km races, including the infamous ‘Fight in the Night’ under lights race on Saturday evening. Spectator access on Friday is free, and only $20 for Saturday or #30 for Sunday admission – a weekend pass is also available for $40.00. All of Sunday’s action will be streamed online live and free via thenationals.com.au