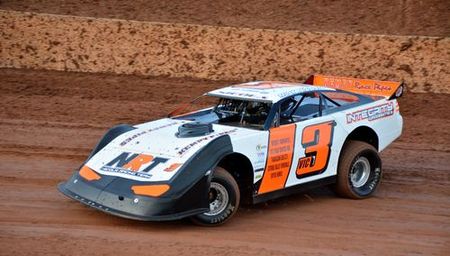 Victorian veteran Michael Nicola turned back the clock at Archerfield Speedway on Saturday night (November 7), leading throughout the 30-lap feature race to win the opening round of the McCosker Super Sedan Series in emphatic fashion. The three-time national champion qualified on pole position for the feature event and followed up with a faultless drive to finish ahead of Sam Roza and current national titleholder Darren Kane, who advanced from the fourth row of the grid to secure third in advance of Sean Black and Gavin Northfield.

The extended break in competition obviously proved to be a productive period for Super Sedan competitors with 27 cars fronting up to launch their season and it was Steve Jordan who got things underway, winning the opening heat in a manner that belied his lack of Super Sedan racing in recent seasons, leading home Black and Northfield. Heading into turn two on lap two, Craig Hammond speared up-track, resulting in a tangle between Colin Kaine and Craig Craft that seemed innocuous but left Kaine with an injured hand and out of action for the rest of the night. Two laps later saw the race halted again when Dempsie Pails climbed over Bob McCosker and crashed back to earth in turn one.

Despite a pole position start in heat two that enabled him to lead the opening lap, Nicola soon found himself shuffled back to second spot behind Nicholas O’Keefe. Although Nicola would assume the lead again momentarily, O’Keefe refused to be intimidated by the reputation of his rival and went back to the front, keeping the three-time national champion at by take the race, with Roza languishing more than two seconds adrift in third spot.

Finding himself under plenty of pressure through the closing stages of the race, an ecstatic Tony Brinkmann held firm at the front of the field to win heat three and prove that perseverance pays off, leading home Tania Smith and Trent Wilson.

A rotary-powered Wayne Randall was the early leader in heat four before Kane swept to the front and cleared away to win, although it would not be enough to secure him a spot in the Pole Shootout. Randall made a fiery retreat to the infield on lap six when flames engulfed his car, advancing Ian Brims into second spot ahead of Northfield.

In the final heat it was Justin Smithwick who lead initially before Roza edged ahead on lap five, only for the positions to change again on the next lap. Smithwick protected his lead from this point to prevail over Roza and third-placed Black.

The B Main saw Matt Pascoe, having started at the back of his heats as a late nomination, unchallenged in leading all the way to defeat Josh McLaren, Craig Hammond and Junior Sedan graduate Hayden Brims.

Nicola was the big mover in the Pole Shootout, outpacing Northfield, Ian Brims and Trent Wilson in the bronze round before upstaging Roza, Smithwick and Northfield in the silver showdown. In the final round, Nicola remained unassailable as he downed Black, Roza and Jordan.

At the drop of the green to get the feature race underway, Nicola launched to lead the field and take control of the race as Black slipped behind Roza into third spot. Having started ninth, Kane wasted little time in moving forward from ninth to climb into the top five after just three laps, continuing his advance to usurp Black from third after just 10 circulations. Meanwhile, with the rest of the field content to cuddle the kerb and run single file on the bottom of the track, Pascoe found himself on the move from position 17, using the outside to great effect as he closed in on the top ten after as many laps. Unfortunately for Pascoe, he would trigger the first restart when his Brendan Doyle-owned #31 refused to turn left in turn three on lap 13, putting the three-time national champ on the infield. It took a few attempts to get the race underway as a result of some shenanigans at the back of the pack that would result in Zac Pascoe joining his father on the grass. With nobody else willing to avail themselves of the pace available on the high line – including those back in the field with little to lose by having a crack on the outside – there were few changes in the order through the second half of the race and Nicola faced little resistance in his charge to victory. The quartet occupying positions two through five would remain in very close contact and, in a frantic finish, less than a second would separate Roza from Kane, Black and Northfield as they swept under the chequer. Jordan was next best ahead of O’Keefe, Wilson and Hayden Brims, who should be well pleased with his debut performance. Bob McCosker rounded out the top ten and, with Smith, Brinkmann, Smithwick, Ian Brims and David Musch failing to go the distance, it was McLaren, Hally and Hammond who completed the finishers.

Sean Rose scored two heat wins in Modlite competition, but it was of little consequence come feature race time as a very familiar scene played out once again with Terry Leerentveld and Klinton Hancey setting the pace. Both Hancey and Leerentveld gazumped Rose at the drop of the green and, whilst it was Hancey who led early, Leerentveld would soon take control of the race and clear away to win. Rose bounced back to grab second spot from Hancey before the race was halted in the wake of a wicked wreck along the back straight from Chris Were. Soon after the restart, Rose surrendered to the infield, elevating Hancey back into the runner-up spot. Having scored a heat win earlier, Chris Fing capped a good night with a third-place finish ahead of Dan Lewis and a best-ever performance from Tim Jackson. Next in line were Warren Hooper, Corey Stein and Julian Olley, with Callum Beerling and Adam Bradford completing the top ten.

The extensive experience and consummate skills of Michael Kendall proved too much to overcome for the rest of the Compact Speedcar field as the five-time New Zealand Midget champion prevailed in the feature race. Teenager Harry Stewart served up another excellent rookie season result to finish in second spot, with Richard Treanor securing third when Matt O’Neill spun himself out of that position with four laps remaining. Dave Collins, Andrew Parkes and Connor McCullough were next best, followed by Andrew Rooke, O’Neill, Mitchell Rooke and Dave Swan. Heat winners were Kendall, Stewart and Bodie Smith, with the latter grabbing the lead from Kendall momentarily in the feature, only to make a hasty retreat to the infield immediately after doing so.

Despite a very small field, the Late Model feature race was plagued by incidents that ultimately saw the event reduced to 12 laps. Bouncing back from a spin on the opening lap, Carter Armstrong would emerge the winner ahead of Aaron Van Zeeland and Michael Jenner.

In Open Sedan action, Ben Robertson won all three heats and the feature in the A division, leading home Keith Craft, Gary Kivella and Colin Morris in the final. The B division feature race went the way of Michael Cheeseman in advance of Mark Anderson, Merv Price and Hayden Grantz.

Having won all three Stockcar heats and seemingly on track to repeat his undefeated efforts of the previous meeting, a flat tyre intervened for Stu Jeffries in the feature race and rendered him a spectator. Subsequently, it was Peter Hosking who emerged as a surprise winner, leaving Sam Bateman and Jack Turner to fill the minor placings as the only other finishers.

Connor Reeves, Jackson Goldie and Ryley Smith shared the spoils in the Junior Sedan heats with a win apiece and it was Goldie who would then go on to also clinch the feature race. Smith secured second spot in the feature ahead of Tyler Burnham, Josh Weir and Nathan McGregor.