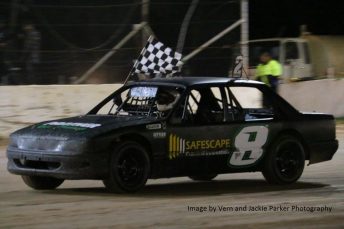 Rushworth Speedway closed out their season on Saturday night with only four feature race winners confirmed after the rain closed in and washed out the remainder of the race meeting, leaving three divisions winners decided on qualifying point, Mick Nicola Jnr in Super Sedans, Lennie Clark in 3 Litre Sedans, Trevor Perry in the Grand Prix Midget Ironbark Classic and Chloe Lamb in the GV Ladies Saloons bagged feature race wins.

With the Super Sedan Victorian state series one of the two main feature events, attracting a number of interested fans to watch some of Victoria’s best, officials were eager to beat any incoming potential rain.

Action in the qualifying races for the Super Sedans was very much a Lucas Roberts and Peter Nicola show, with both drivers picking up two wins apiece. Roberts won the first two heats by just over a second and then .295 of a second over Ash Bergmeier, Roberts was very fast in the first heat with a 15.473 second best lap time and the drivers locked in the fastest ten lap race time also clocking 2 minutes 42.446 seconds.

Nicola then won the third heat by almost two seconds and the last by .483 of a second. Rain then ensured the end of the night for Super Sedans before they could have a final. Mick Nicola Jnr then won the twenty five lap final from Roberts by less than a second with the top five made up by Bergmeier, Brad Wicks and Anthony Randall.

Grand Prix Midget racers were competing for the Ironbark Classic with points in their Masters Series also up for grabs. Over three heat races Australian champion Trevor Perry was unbeatable picking up the three wins. With top qualifiers starting at the rear, Perry made short work of getting to the front. Local woman Lisa Chalcraft was the best of the rest with David Bacon and Chris Fowler chasing her for a number of laps, Perry took the win whilst Fowler passed both Bacon and then Chalcraft on the same lap to move to second with Chalcraft finishing in third and Bacon being recorded as fourth a lap down on the winner.

The 3 Litre Sedans have a strong connection to Bendigo and the surrounding areas and they returned to Rushworth with Lennie Clark keen to lock in this victory in front of many people he has known over the years. With three heats in which to qualify, Clark won the first then a Goulburn Valley Auto Club member Daniel Wilson was next to win. Clark won the final heat.

A feature race was eventual for Scott Mallon and his Nissan when he tried to prove to everybody he was indeed running with dot rated tyres lifting the rubber off the turf and exposing the under tray of his car before landing and continuing on. Clark took the win from Wilson and Kevin Clarke with Mallon and then Matthew Callanan completing the top five.

Goulburn Valley Ladies Saloons racing was once again fantastic with three heat races being shared between the seasons to most competitive racers in the class, Jacquie Fitzpatrick and Chloe Lamb.

Fitzpatrick won the first race by just over six seconds, then lamb won ahead of Cassie Wicks by just .780 of a second in the second heat with Fitzpatrick setting the fastest one lap time of the night for Ladies at 18.687.

Fitzpatrick won the third heat by over five seconds before a twelve lap final that didn’t quite go here way. Fitzpatrick led from the start until Lamb made a move on lap seven to take the lead. Trying to keep pace in the chase, Fitzpatrick then rolled over onto her roof in turn one, eliminating her from the race. Lamb finished ahead of Leeanne Hodge by just .387 of a second in a great run from Hodge, Belinda Chalcraft, Cassie Wicks and Natalie Thompson completed the top five.

In Junior Sedan racing qualifying racing wins went the way of Lachie Fitzpatrick, Fitzpatrick again and Josh Cecil his early season nemesis. Fitzpatrick set a fast time of 18.636 in the second qualifier and had a huge win in the same race by seven seconds. Fitzpatrick won the show on points from Cecil, Tyler Gahan, Daniel Smith and Kodye Basten.

Goulburn Valley Production Sedan racing was dominated by Wayne O’Keefe in a sensational close to the season. O’Keefe won all three heat races with gaps back to second place varying from .677 of a second in the first to almost 8 seconds in the second.

All starters finished on the lead lap in the first heat that went start to finish without caution. The second qualifier was finished in a time of 3 minutes 8.897 seconds. O’Keefe set a fast one lap time of 18.429 in the second qualifier. O’Keefe won the points for the night from Geoff Lee, Leigh Jeffery, Shane Hutchins and Scott Smith.

Finally the Goulburn Valley Open Sedans division had six qualifiers and no feature race. Phil Lamb, Keith Simmonds courtesy of Adam Box being penalised by the Steward and put back from first to third, Lamb again, then Box, Carlie Wicks and finally Box in the last took out the six qualifying race victories.

Box set a sensational one lap time in the second heat of 18.035 and the feeling was that the Opens could get faster, and they did! Box went faster again in the fourth qualifier with 17.907 his new fast time of the night before his adversary Lamb got the bragging rights with a 17.871 in the last qualifier, despite Box crossing the line ahead of him.

Box led the fastest overall qualifier to the line in the fourth with a time of 3 minutes 1.477 seconds and he also won the closest qualifier in the sixth by just 0.093 which had the punters on the spectator mounds up on their feet. Lamb had the biggest win of the evening by just over seven seconds in the third qualifier.

The overall for the night went the way of Lamb over Box, Peter Fitzpatrick, Carlie Wicks and Luke Basten.

All that is left now is to hold the annual presentation night ceremony and find out who earnt enough points to become the class champions in all the club classes.