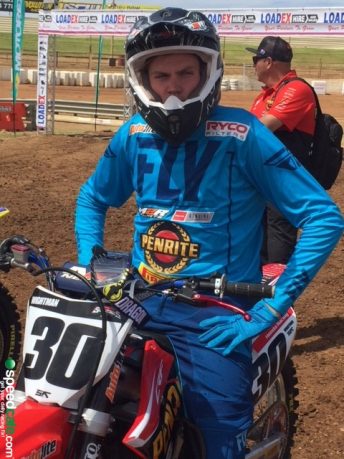 Sutherland, 26, agreed terms to join the Penrite CRF Honda Racing team after landing back home on the Gold Coast following an international race appearance in Indonesia the previous weekend.

With Webster sidelined by injuries suffered at round two of the series in Bacchus Marsh, Victoria, Sutherland will race the final four rounds of the SX2 championship aboard Webster’s potent Honda CRF250R race bike fettled by Mick Lillis.

“The whole deal came together really quick,” Sutherland explains. “I’ve known Mick and Ian Wightman from the team for a long while, and they put the opportunity out there. Then once I was contacted by team owner Mark Luksich, it was an opportunity way too good to let pass.

“It’s been a hectic week after racing in Indonesia the weekend before, and I only got to ride the Penrite Honda for the first time on Saturday in Adelaide. But overall the event went well and I came away with a 12th place finish in the SX2 Final, which is okay all things considered.

“Just my starts hampered me in Adelaide,” Sutherland continued, “and with the track being one-lined, it was tough trying to come through. If I had gotten a better start in the Final, I could have run fifth to tenth, which is where I consider I belong.

“Mick’s given me a spare clutch now, so I’m planning on wearing one out while practising starts over the next two weeks before the next two rounds of the championship at the Aus-X Open in Sydney!”

Born and bred at Inverell in northern NSW, Sutherland has raced for 20 years and combines racing with working as a carpenter and concreter. His career best finish in the Australian Supercross Championship is sixth overall (SX2) in 2012.

In the SX1 category at Adelaide, Joel Wightman endured a frustrating night, finishing 12th in the Final.

“Honestly, it was a frustrating event for me,” Wightman explained. “My heat race went good with no mistakes and I finished fourth, which gave me a decent gate pick for the Final.

“Then my start in the Final had me in the top group sitting about third into the first corner, but then as we shuffled around through the first rhythm section, a rider in front of me had a decent get-off over a double and I had nowhere to go except into his bike.

“I went down, got stuck in the back of another bike for a split second, and by the time I pulled my tweaked bike back out and got going, I was basically last. I regathered myself and finished 12th.

“I was pretty bummed to have my night go that way as I felt like I had a good race in me but sometimes that’s just racing. I’ll put it behind me and now I’m super-excited and looking forward to the next double-header round at Aus-X Open in Sydney in two weeks time.

Wightman and Sutherland will line up at the Aus-X Open event at Homebush on November 11/12, before then taking aim on the sixth and final round of the championship at Jimboomba X-Stadium in south-east Queensland on November 18.

Meanwhile Kyle Webster is now back at home recuperating after undergoing surgery to stabilise the T7, T8, T9 and T10 vertebrae he damaged in a crash at the Bacchus Marsh second round of the Championship on October 14.

“It’s still very early days regarding a recovery time, so I will just have to be guided by the doctors to make sure we take it one stage at a time.”