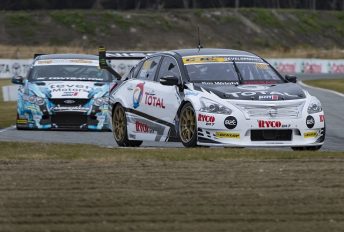 Cambridge V8 driver, Nick Ross, will mark a milestone in his racing career as he lines up for his 15th season in the BNT V8s which kicks off at Pukekohe, November 3-5.

With a championship title to his name in the 2013/14 season, 42-year old Ross finds himself the longest competing current driver in the championship.

“It’s hard to believe that I’ll be lining up for my 15th season in the championship! I never thought that all these years later I’d still be here. I’ve been very lucky that over the years we’ve had some fantastic sponsors, and while we still have those we’ll still keep lining up on the start line,” says Ross.

Ross says he thrives on the element of competition against his fellow competitors and it’s winning races that keeps him motivated.

“It’s the thrill of close racing, and my on going passion to race cars and of course those race wins that keeps me motivated to compete every season.”

The off season has seen his Concept Motorsports team meticulously go over his Total Lubricants Nissan Altima to improve some of the reliability issues that troubled the car last season.

“We did have a few reliability issues last season which was frustrating, because when the car was running well we were making steady progress on track and getting some good results.”

“For me, and I guess everyone else it’ll all be about limiting the mistakes. Finishing races and being on the podium will be key to a good championship result.”

“The opening round at Pukekohe is the biggest event of the year, it’s a tricky circuit, so doing well there and keeping off the walls will be crucial to setting up the rest of your season.”