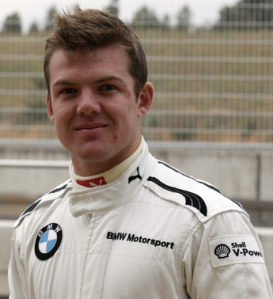 Hot on the heals of his recent appointment within the Japanese TOM’s Toyota Formula 3 team, Kiwi Nick Cassidy has also been named as a participant in BMW Motorsport’s Junior Programme in Europe.

Cassidy, along with three other successful candidates, came out on top from a large contingent of hopefuls, narrowed down through a fitness test and interview selection process, to a total of seven young drivers who competed against each other on the “Circuito Monteblanco” in a specially-prepared BMW M235i Race car.

A jury consisting of BMW works driver Dirk Adorf (DE), BMW Motorsport engineers and others in charge of the junior programme assessed the abilities of the talented young drivers in areas such as driving strength, consistency, understanding of the car, teamwork with the engineers, concentration, flexibility, self-assessment, ability to receive feedback and criticism, and behaviour in the group.

The four new BMW Motorsport juniors made an outstanding impression. The quartet of Nick Cassidy (NZ), Victor Bouveng (SE), Louis Delétraz (CH) and Trent Hindman (US) will make their first joint appearance at a welcome event in Munich (DE) on 28th April.

The BMW appointment will compliment Cassidy’s Japanese F3 commitments and he remains focussed on winning the F3 championship when it kicks off at Suzuka next week.

“Being a part of the BMW Motorsport Junior Programme is an important step in my career, and one I am very happy about,” said Cassidy.

“My career has been primarily single-seaters, but I have had some experience in touring cars in the past. I have two priorities this year: I want to win in Formula 3 and, together with BMW, I aim to learn as much as I can to improve myself as an all round driver.”

“I am really looking forward to having the support of BMW in 2015, in conjunction with my Formula 3 Program with TOM’S in Japan.

“I will still be based in Japan, with full focus to win the F3 Championship, but will travel to Europe for training events together with BMW.

“The experience of working with Dirk Adorf and racing on the famous Nürburgring-Nordschleife is an amazing opportunity – one I am definitely looking to make the most of this year.”