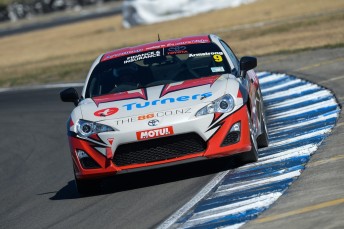 Albeit a little less high-paced compared with the TRS series he dominated, or the European Formula 3 cars he’s raced most recently, the opportunity to drive Toyota’s stylish sports car in competition remains an exciting prospect for Cassidy.

“I’ve only ever driven an 86 road car for some Toyota New Zealand hot lap experiences. It’s a fantastic handling car and I know the race car will only amplify that fun of driving” Admits Cassidy, who has also successfully stood in for Greg Murphy in the V8 Super Tourers, while Murph was recovering from back surgery.

“It’s really going to be a fun weekend for me, racing in New Zealand among friends. I’m grateful to have the opportunity”

Team owner, Rick Armstrong, is confident his son’s car will be in good hands.

“You’d be hard-pushed to find a more suitable driver than Nick obviously, his credentials alone put him at the top of the list. But with Nick and Marcus being good friends it does make it all the easier to hand him the keys.”

Marcus Armstrong hands the car over on the back of two race wins and a second place last weekend at Ruapuna, but now heads to Europe with Tony Kart Racing for the season, as well as testing in Formula 4 with an eye to competing in Australia later this year.