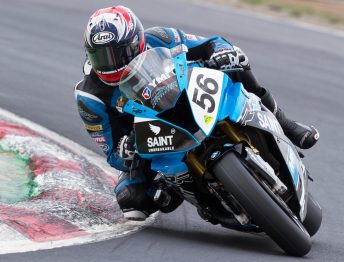 NextGen Motorsports is raring to go for Round 4 of the Yamaha Motor Finance Australian Superbike Championship presented by Motul Pirelli (ASBK) next week, despite a spectacular racing incident over the weekend with one of its riders Troy Guenther. Team Manger, Wayne Hepburn is confident for a strong weekend.

Hepburn described the scene; “We were having a strong weekend and Troy had sensational speed on the Pirellis,” he said. “During the Sunday morning warm-up, Troy was passing another rider, when all of a sudden that rider’s bike collided with Troy. Our BMW pretty much snapped in half under the impact and also caught fire!

“Troy is going to be fine. Hopefully he will be ready to go for the upcoming round at Hidden Valley, it all depends on how fast he recovers,” Hepburn described. “He simply sustained several soft tissue injuries and hurt his leg slightly. Soft tissue injuries do take time to heal, so my only concern is whether he will have the strength in his leg to ride a Superbike in the next two weeks. Apart from that he was very lucky, as it was one of the biggest crashes I’ve ever seen.”

Guenther’s bike was highly damaged as a result of the incident and was a total write-off. Now the team are working around the clock to truck a spare bike from Melbourne to Darwin ready for the 18-year-old to ride. The dedication shown by the outfit to prepare a race bike at the 11th hour is extraordinary, and shows the lengths they are willing to go to achieve success in the ASBK.

The incident was untimely after Guenther was showing recent improvement in testing.

“Troy was previously (before Darwin testing and crash) 10 precent off where we would like him to be and I’ve told him that,” Hepburn admitted. “We’ve tested on the practice bike at Winton and he actually went faster than when he raced. It’s all about evolving, so I’m quietly confident that top eight results can be achievable, if he recovers fast and well from the crash.”

Guenther rides the NextGen BMW S1000RR Superbike. “The reason why we went back to BMW is because we knew the package inside and out,” According to Hepburn. “Our previous main crew chief has gone overseas this year, helping out with Aussie Lachlan Epis in the World Supersport Champoinship (WSSP). Returning to the BMW makes it easier for our remaining crew. I’ve worked with BMW’s long enough to know what they’re capable of and to provide a solid reference point for a Rookie Superbike rider like Troy.

“At the moment, the bike is ahead of Troy, that’s not a rude thing to say,” stated Hepburn. “Troy’s catching up and he’s not far from being able to provide input to improve the BMW package. The machine in race trim is more than competitive against the other brands and is more than a handful for most riders.”

Teammate Ted Collins has so far experienced a phenomenal season in the Motul Supersport class and is currently leading his respective championship.

“Ted (17-years-old) is really growing as a rider on the Suzuki GSX-R600,” explained Hepburn. “It’s just a matter of him building his confidence and he has been training like you wouldn’t believe over the off-season! He doesn’t hesitate and his commitment is a step above everyone else. You can see it with his body language on the bike. Winton was fantastic for him and I like to think it will continue.”

Supersport 300 rider, Nicholson (15-years-old) currently resides in second in the championship standings and has shown phenomenal development. Nicholson on the Kawasaki Ninja 300 will certainly be a rider to keep an eye on.

Hepburn is confident for a strong weekend at Hidden Valley with all three riders.

“With the long straights and track in great condition, it will be a great round,” Hepburn said. “I’ve been involved with ASBK for a long time and have been to Darwin several times since. This year I’ve heard nothing but great comments for the round and everyone is just looking forward to the event. The ASBK is turning into a monster in 2017!”

Make sure to attend Hidden Valley to see how NextGen Motorsports fares at the next round of the ASBK!