Nathan Barbeler reached new heights in the Street Stock class over the weekend, delivering a career-best performance during the National Title at Mildura’s Timmis Speedway to come home with a top-five result. However, he certainly didn’t do it the easy way. 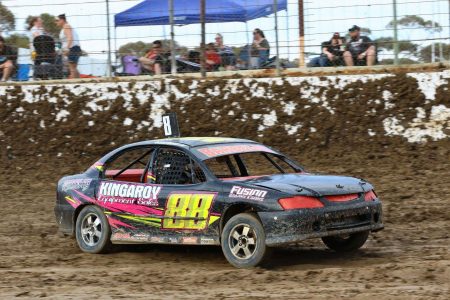 Making the long trek over 1,600 kilometres from his home in Kingaroy, Queensland to the northwest Victorian town of Mildura, Barbeler was eager to improve on last season’s National Title campaign at Adelaide Motorsport Park in South Australia, where he was unable to qualify into the C main.

Struggling slightly with the challenging track conditions on Saturday’s opening night of competition, the 24-year-old picked up a pair of fourth-place finishes, but unfortunately had heavy contact with the wall and encountered some major damage to the car. The crew worked frantically and got the car ready for his third heat. Only managing a seventh in that heat race due to the damage. This only had him sitting in 51st on points heading into the second and final night.

Coming away with the best possible result in his fourth and final heat race on Sunday night, Barbeler’s win was enough to earn him a qualification into the B main 12th – already a significant improvement on his previous National Title attempt. Entering the race with an all or nothing approach, Barbeler did well to keep out of trouble, elevating himself from position 12 to second and in doing so, securing himself a spot in the National Title-deciding feature race.

Lining up on the second last row for the 40-lap feature race, Barbeler’s goal was to stay out of trouble and then have a crack halfway through the race, this proved to be a feat, due to the hectic nature of the race. Doing very well to survive to turbulent conditions, Barbeler had made his way up to 10th place after the first three quarters of the distance, it was only then he had his sights set on the top five.

Quickly making up more ground, the pilot of the Qld # 8 Kingaroy Equipment Sales supported VY Holden Commodore took over fifth place with just four laps remaining; a position he retained through to the fall of the chequered flag.

“The team and I worked a lot on our setup throughout the weekend, which made all the difference on night two. We were up against 131 other drivers, many of whom are considered the country’s best, so just making the feature race was an achievement for us.

“To go even further and finish inside the top five made the trip to Mildura that much more worthwhile for myself and the whole team, who I can’t thank enough for their efforts.”

For his next appearance, Barbeler will be contesting the Cannonball Run at Maryborough Speedway on March 30, followed by the Queensland Title at Toowoomba’s Hi-Tec Oils Speedway on May 4, where he’ll be hoping to improve on last season’s third-place finish. Barbeler will also be looking to consolidate his front-running positions in the Kingaroy Speedway, Hi-Tec Oils Speedway and Bundaberg’s Carina Speedway Track Championship point standings.

Special thanks go to Barbeler’s mum and dad (Michelle and David), Robert Trapp, Travis Hutchison, Kent Shelford, the Midolo family, and Brooke Ferguson. He would also like a big shout-out to his girlfriend Adelaide, his sisters Chantelle and Sammy, along with the rest of his family and friends who couldn’t be there with him but was at home watching the LIVE stream cheering him on.

To find out more about Barbeler and his team, LIKE them on Facebook by searching Barbeler Racing Team.