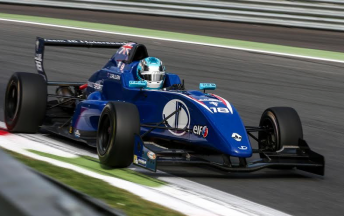 MEDIA RELEASE: With a seat in the World Endurance Championship his ultimate goal, Aussie young-gun James Allen has relocated to Europe to turn the dream into a reality.

Recently signing with highly respected European team JD Motorsport, 19 year old Allen is using the season to help springboard him towards the World Endurance Championship and LMP1 racing in the future.

“If I go well and accomplish my goals this year, it can set me on the right course to drive at the Le Mans 24 Hours and the World Endurance Championship,” said James Allen.

“Ideally my motorsport goals lead me to LMP1; I really like prototype style cars and endurance driving. I was at Le Mans in 2014 and the buzz was amazing.”

Before he reaches those lofty heights, the plan is to get the most out of his first serious season in the Renault Championships with a team that has a proven history in European open-wheeler racing.

“I was invited to test with (JD Motorsport) at the end of the 2015 season,” said Allen.

“All of the key Eurocup and NEC drivers were there, so I was up against a lot of serious competition, but I posted the fastest times at the Red Bull Ring and Spa, and I was fifth at Paul Ricard and Motorland.

“The team was very happy; it was very satisfying and gave me a lot of confidence.”

Having approached the first two seasons as his apprenticeship, Allen has learned a lot and has big goals this season.

“I suppose I’d like to be in the top three in Eurocup by season-end and achieve something similar in NEC,” said Allen.

“In testing, my times suggested that this was a realistic goal.

“Over the last two years I’ve learned a lot when it comes to set-up, front suspension, anti-roll and the like. A lot of my improvement stems from feeling comfortable in the car which has increased my confidence.

“But in saying that, having raced for a couple of seasons; and now driving for an established team, the pressure is higher as there is increased expectation.”

With the twin Renault Championships being staged at some of Europe’s most famous tracks, including Hockenheim, the Nürburgring and Silverstone to mention a few, the Eurocup series also travels to Monte Carlo alongside Formula One.

“Partnering with F1 is very exciting given where you are and who is there,” said Allen.

“If you do well, there is the chance of being noticed, but this is not a major focus. I just want to drive as well as I can and get some results.”

Having finished the opening rounds of both Championships mid-field, the next Northern European Cup round is at Silverstone this weekend, while Eurocup competition resumes at Monaco later this month.