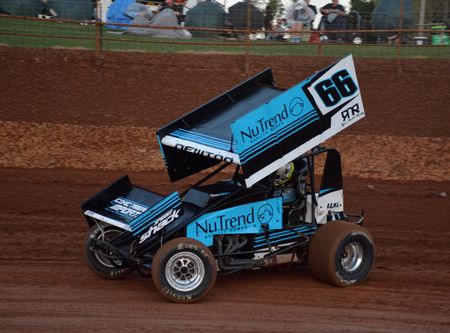 On a crazy night of carnage and chaos, it was a talented teenager who stood tall in victory lane when Ryan Newton outgunned the field to win round 12 of the East Coast Logistics Sprintcar Track Championship at Archerfield Speedway on Saturday night (April 2). Despite only one previous top-five result in ECL competition this season, Newton was faultless in leading throughout the 30-lap feature race after launching from the outside front row. Kevin Titman started his Elite Diesel/Myla Graphics #59 from pole position and would ultimately finish in second spot by a narrow margin, with Brock Hallett securing the final place on the podium. In a race that required the three podium placegetters from the previous round to qualify via the B Main and would see national champ Jamie Veal spin on two occasions, it was Adam Butler and Bryan Mann who rounded out the first five.

Having initially been abandoned in the wake of several incidents, the TFH Midget feature race would resume later in the night and would result in Michael Kendall collecting his third win for the season. Charlie Brown led the early stages of the race before the merest of moments allowed Kendall to pounce, with Scott Farmer filling third ahead of Brock Dean and Rob Stewart.

Mark Blyton was an easy winner in the Wingless Sprint feature race, downing Michael Butcher and Jason Jolley in a NSW trifecta, while the only other feature race on the open wheel program saw Charlie Bowen outpace Chay Corbett and Kobi Wright in Formula 500 Juniors.

In a qualifying session that demonstrated how much the track conditions influence the results and how important a solitary quick lap can be in determining your fate for the rest of the night, it was Tim Farrell who cut the quickest lap of 11.832. However, with a penalty relegating Farrell to 15th overall, it was the second quickest qualifier in Andrew Baumber (11.862) who would score maximum points and secure himself a place in the field for the Dash. A late addition to the field, Luke Thomas (11.867), was next best, followed by Titman (11.936), Mann (11.937), Newton (11.942) and the last of the sub-12 runners in Butler (11.963), with Veal, Brent Kratzmann and Aaron Kelly rounding out the top ten. Meanwhile, series leader Luke Oldfield, who has topped the timesheets on four occasions this season, was languishing in 21st overall, two spots ahead of previous round winner Steven Lines.

Trent Vardy was unchallenged in winning the opening heat of the night, with a late-race restart to remove a stricken Randy Morgan failing to halt his momentum as he led Peter Campbell and Veal to the flag.

A hiccup from Karl Hoffmans through turn two on the opening lap of heat two caused a kerfuffle that eliminated both Hoffmans and Jy Corbet, with Thomas joining them two laps later. Once underway, Taylor Prosser was untroubled in leading throughout to down Hallett and Newton.
From the front row, Oldfield romped home in heat three, finishing more than eight seconds clear of Mitch Gowland, with Darren Jensen third.

Farrell also prevailed from pole position in heat four, albeit by a much smaller margin over Michael Saller, leaving Veal third once again.

Demonstrating his utter determination to prevent Steven Lines from securing the lead of heat five, Oldfield launched an outside run into turn one that quickly went off-script when he was pitched into a heavy crash. Even with Oldfield out of the equation, Lines still found himself unable to get the job done from pole position as Aaron Kelly would chase down the lead and take the race, with Butler third.

Harry Stewart set the early pace in the final heat of the night before being rounded up by Corbet, with Titman grabbing third to emerge as top qualifier.

With Titman selecting pole position in the pre-race grid inversion for the Dash, he would share the front row alongside Butler, with Veal and Newton occupying row two. With Titman leading away, Newton immediately disposed of Veal and Butler to grab second and that is how they remained for the duration. Butler would finish third in advance of Hallett and Veal, the latter having to fight back after a spin put him at the back of the pack. Mann and Baumber were the remaining finishers as Kelly headed infield a couple of laps from home.

Quite remarkably, the B Main would see Oldfield, Lines and Corbet starting midfield and, whilst all three would emerge unscathed from a turn one skirmish that eliminated Vardy, the restart would see Lines resume from the rear. Corbet always looked in control and, despite a restart on lap five that resulted from Thomas tipping over in turn four, he would finish more than four seconds clear of Oldfield and Campbell, leaving Lines with the task of securing fourth, a mission he accomplished with four laps remaining.

At the drop of the green to get the feature race underway, Titman launched into a wheelstand as Newton surged to the lead, only for the race to be halted when Oldfield found himself upside down again in turn one and out of action, failing to finish on the podium for only the second time this season. With Prosser also tipping over, 16 cars regrouped for the restart, which proved a replica of the first attempt with Titman again opting for a wheelie as Newton zoomed to the lead. Any hopes Veal harboured about reeling in the leaders were extinguished when he spun in turn four on lap four and, whilst he was able to keep the car mobile to avoid a restart, he rejoined in 15th spot. The only restart came on lap 18 when Veal inexplicably spun in turn four once again and, with Titman unable to orchestrate a successful bid for the lead, young Newton held firm at the front to score a breakthrough result. Hallett finished strongly to be safe in third at the flag, followed by Butler and Mann, the latter pouncing on a mistake from Kelly to slip into the top five. Kelly secured sixth in advance of Jensen and Kratzmann as Veal climbed back to ninth ahead of Michael Saller. Neither Lines nor Corbet could come close to their efforts from the previous show, languishing in 11th and 12th respectively and, with Stewart and Campbell both exiting the contest before the halfway point, the time trial top guns in Farrell and Baumber rounded out the finishers
.
Having delivered big fields throughout the season, it was very disappointing to see only 14 Midgets front for round eight of the TFH Series, with only 13 of these firing up for the heat races.

Unfortunately, the field was reduced further on the opening lap of heat two when Darren Dillon rode out a heavy series of somersaults in turn one. The ensuing restart saw Casey O’Connell spin in turn two to be collected by Brad Dawson, putting both cars on the grass and leaving just four runners to face the restart, from which Charlie Brown would face little resistance in leading home Scott Farmer and Tony Stephen.

Kendall doubled up in winning heat three over Brown and O’Connell, while the final heat saw Palmer outpace Dean and Farmer.

The first attempt to get the feature race underway only made it as far as turn two before the first of several incidents played out, the end result being Glenn Prowse getting upside down on the back straight and flat tyres befalling Kendall and Palmer, both of whom were allowed to restart from the rear with fresh rubber, although Kendall would take advantage of the fact that nobody else wanted to start from the outside line, elevating him to the second row. It was Brown who led the field away from Dean and Kendall, with a restart coming on lap three when Palmer and O’Connell parked in turn one. When Dean tipped over in the main straight before the race could even get started again and then Jordan Mackay rode out a frightening series of somersaults at the next attempt, having climbed over the rear of an ailing Kody Stothard, race officials ordered all cars back to the pits to have a think about their actions, with the race to be continued after the Sprintcar feature. Thankfully, sanity prevailed when the race resumed with Brown leading Kendall and Farmer. On lap five, Stothard tipped over in turn four but was able to continue, with Kendall slipping into the lead soon after the restart. Brown chased hard but was unable to reclaim the top spot, his momentum halted with three laps to run when Jesse Harris tipped over in turn four and was also able to continue. Although the gap was narrower at times over the final laps, Kendall would eventually finish more than half a second clear of Brown, with Farmer besting Dean to secure third. Rob Stewart finished fifth ahead of O’Connell, Brad Dawson and Stothard, leaving Palmer and and Harris as the remaining finishers.

With state champ James Kennedy failing to front and both Liam Williams and Tomas Partington striking problems during the night, it was Kurt Wilson who took best advantage of the opportunity to lead every lap of the Mainstreme Automotive Formula 500 feature race. The north Queensland duo of Kaydon Iverson and Brodie Davis filled the minor placings, followed home by Mitchell Whittaker, Jake Hooper and Brady Argles. Brock Thornton was next in line, with Jared Boys, Amanda Chaffey and Noah Ball completing the top ten.

Heat wins were shared between Williams, Wilson and Iverson and it was a runner-up result in his other outing that ensured a pole position start for Wilson in the feature race.

In a display of endurance as much as anything else, Wilson also prevailed in the Lightning Sprint feature event, outpacing a small field from which Jim Kennedy and Scott Genrich, who won the second heat, would emerge with the minor placings. The only other heat winner in Wayne Jukes was next best, leaving Harley Graham and Rohnan Wells as the only other finishers.

The locals were handed a shellacking in the Boss Hogg’s Steakhouse Wingless Sprint feature race, with Dubbo veteran Mark Blyton dominating the night. A win and a runner-up result in his heat races put Blyton on pole position for the feature race and he was unstoppable through the 20-laps to lead home Michael Butcher and Jacob Jolley. The first Queenslander home was Ben Manson in fourth, with Jamie Usher and Lachlan Robertson next best ahead of another interstater in Mason Cattel. Completing the first ten in an incident-free race were Brody Thomson, Daryl Marshall and Jayden O’Toole.

Other heat winners included Jolley, O’Toole, Usher, Marshall and James Grady, while a pair of runner-up results in the preliminaries would plant Butcher on the front row alongside Blyton for the feature.