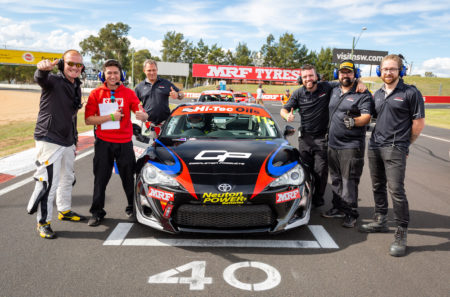 Following a rewarding debut at the Bathurst 6 Hour last year 11 Racing plans to return to the prestigious race this coming Easter weekend (10-12 April), doubling-up its car line up and ambitiously aiming to build on that podium finish by targeting class victory with an all international driver line up underpinned by a quartet of quick new Zealanders.

Last year racing brothers Murray and Graeme Dowsett teamed up with professional sports car star Davide Rizzo in the 11 Racing Toyota 86 for their debut in the 6-hour classic at Mt. Panorama Circuit. In the thick of the front running class action right from the start of the race their pace and excellent car preparation netted them a trip to the podium.

Buoyed by that success 11 Racing, a leading Australian-New Zealand production car racing team, has set its sights on returning to the race this year with a strengthened roster that can aim for the win.

The drivers – Murray, Graeme and Davide – that finished on the podium in last year’s race (which was in fact the fastest in the 6-hour’s history with the winning car covering over 800 km) will be reunited in the Toyota 86 while a second car will be entered with driver line up put together that can also get the job done and chase for the win: New Zealanders Reid Harker and Brad McDonald and Malaysia’s Adrian D’Silva.

The team is looking to build on last year’s success and believes its plans for this year demonstrate an uncompromising approach to this race. 11 Racing is confident it now has two well rounded and highly experienced driver line ups that will both be equally capable of mounting a challenge to win. The target is victory and to have both cars finish on the podium.

But 11 Racing’s very aware there will be ultra-tough competition from big and very strong entry in this highly competitive class, including several other Toyota 86s and lots of experienced drivers. Such is the prestige of the 6 Hour now that it’s attracting swathes of top-level drivers. So, everyone at 11 Racing is going to have to work really hard and going to have raise their game, be very well prepared and keep pushing and pushing to achieve these ambitions.

The No 58 entry is led out Murray and Graeme. Last year was the first time they had ever raced together in their careers. Their first race together netted a podium – so it was a great start! Murray is an experienced Australian production car racer recently finishing the Queensland Production Championship third in class and third in the Massel Endurance Series while Graeme has enjoyed huge success in sportscars with highlights of that long list includes GT Cup victory in the grueling Sepang 12 Hour, Asian Le Mans Series and Asian Le Mans Sprint Cup titles and a podium in the Bathurst 12 Hour.

They will be joined by Davide who has enjoyed a decade long career at the top of Asia sportscars, racing in Porsche Carrera Cup Asia (PCCA), Asian Le Mans, GT Asia Series and Blancpain GT World Challenge Asia. Key points include winning the Lamborghini Super Trofeo overall (2015) and a class podium at the Spa 24 Hours (2017).

In the No 64 entry Reid, Adrian and Brad will all bring individual strengths to the equation. Reid is a young driver who has burst onto the scene in recent years and has plenty of experience of the Toyota 86 thanks to multiple wins in New Zealand’s one make series culminating in him being championship runner up last year. Reid in fact will arrive at the Bathurst 6 Hour fresh from racing in PCCA during the inaugural Vietnam F1 Grand Prix to be held in Hanoi the weekend before.

Meanwhile, there’s plenty of overlap too. Four of the drivers (Graeme, Davide, Harker, Adrian) have raced in PCCA and while Bradley trained with Earl Bamber in single seaters, Graeme, Adrian and Reid have all driven for Earl Bamber Motorsport in PCCA.

Finally, Davide and Reid are both very well-regarded professional driver coaches so they will bring extra individual strengths to the No 10 and No 12 entries respectively.

Now heading into its fifth edition the Bathurst 6 Hour should be the most exciting yet with a grid of more than 60 cars expected. The race will be shown live and free-to-air on Seven Network. It headlines the Easter weekend ‘Bathurst Motor Festival” which will see five support categories on the bumper programme featuring 13 hours of racing and more than 300 drivers taking part.

Murray Dowsett (New Zealand): “2019 was our first year at the mountain and the experience was a very important building block for all of us. Despite the best efforts of drivers and crew we suffered some mechanical trouble late in the race and dropped from 2nd to 3rd but proud of what we achieved first time out. We are coming back bigger and better in 2020 with a two car team focused on maximizing the success of both cars. We are proud to have five experienced and emerging international drivers and an outstanding pit crew who are up to the challenge that is Mount Panorama as well as new backing from our sponsors Diversion Garage and Completion Products.”

Brad McDonald (New Zealand): “This is my first international race start so I am over the moon excited to be given the opportunity. Having been around top-level racing, following the one and only Earl Bamber around, and previously being involved in EBM’s B12HR victory last year I am pinching myself to finally get the opportunity to race at this iconic circuit myself. No amount of preparation can guarantee a result here so all we can do is prepare ourselves as best as possible and then roll the dice on Sunday!”

Reid Harker (New Zealand): “I’m looking forward to jumping back into a Toyota 86 and really excited to get my first taste of Bathurst, a track I’ve always wanted to race on. I’m racing alongside a great bunch of guys so I’m sure we’ll have a blast!”