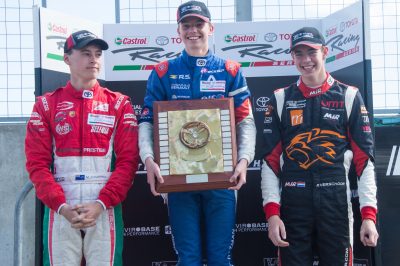 Leading contenders in the Castrol Toyota Racing Series, Marcus Armstrong, Robert Shwartzman and Richard Verschoor are unlikely to know their fate until the chequered flag at the end of the 35 lap New Zealand Grand Prix at Manfeild on Sunday afternoon.

With 75 points for a race win and three races over the weekend – all worth the same points – the trio are only separated by 60 points.

Armstrong from Christchurch could become the first Kiwi since Nick Cassidy five years ago to win the title, while Russian Shwartzman and Verschoor from the Netherland could continue the recent trend when up and coming international drivers have won the Toyota Racing Series.

Australian Thomas Randle won last summer and he was preceded by England’s Lando Norris (2016), Lance Stroll from Canada in 2015 and Andrew Tang of Singapore won in 2014.

From the outset Armstrong has been quite clear in his intent. Winning the championship is more important than winning races. The 17-year-old took the series lead at the first round at Ruapuna where he won two races on his home track.

With a 33-point lead over Shwartzman, he can afford to finish one place behind his rivals in all three races at the weekend to reach his goal.

The 18-year-old from St Petersburg and Verschoor, who is 17, have to consistently beat the Kiwi on the Circuit Chris Amon race track to close the points gap, with Verschoor 27 points behind Shwartzman making his task more difficult.

Verschoor is further behind Armstrong after a mechanical problem at Ruapuna, but apart from that all three and their cars have been a model of consistency.

Verschoor has won four races and Shwartzman broke his duck at Taupo with victory in the Denny Hulme Memorial Trophy event. The Grand Prix title might be a consolation prize if they cannot take the Toyota Racing Series.

But they won’t have things all their own way. Juan-Manuel Correa, who is originally from Ecuador, but races with a United States competition license has won twice, as has Clement Novalak who now lives in London after being brought up in Switzerland and born in France.

Invercargill’s Brendon Leitch has also tasted victory and all three along with England’s James Pull are capable of mixing it with the title contenders and depriving them of vital points.

With every change in position in Saturday afternoon and Sunday morning’s preliminary races, the series permutations will constantly change.

Such has been the close racing between the leading protagonists, it is unlikely anybody will have a 76 or more points buffer before the Grand Prix, which will decide the 2018 Castrol Toyota Racing Series.