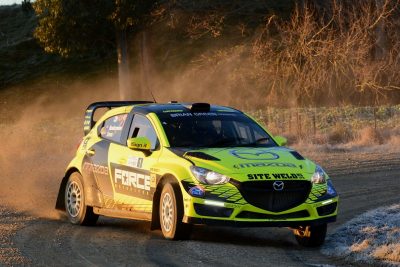 Current New Zealand Rally Champion, Andrew Hawkeswood of Auckland, will line up in this year’s Catlins Coast Rally on Saturday 11 August in what is another coup for the event.

Hawkeswood will be at the wheel of the Mazda AP4 that he built and took to the national title last year. That was his first national championship title despite the fact he has had a hugely successful career over many years although in fairness he has only done the full championship six times in his lengthy career.

He does have fond memories of both rallying and competing in endurance racing in the south however – in fact his first national championship rally win came at the 2004 Rally Of Southland. Hawkeswood has competed twice before at Catlins. On one of those outings he crashed early but on the other occasion in 2009, driving an Audi Quattro replica, he came within a whisker of winning, leading until near the end when Dean Bond’s local knowledge allowed him to charge into the lead to take the win over Hawkeswood by a mere 2.2 seconds. “I really enjoyed it,” says Hawkeswood. “It is good to come down and support the event. The enthusiasm of guys like (Assistant Clerk Of Course) Roger Laird is infectious. Guys like Roger and those at other South Island events like Carl Rabbidge and Norman Oakley are all so good and have always been there.” Hawkeswood has business interests’ in Central Otago and will eventually move there so he does have an affinity with the south.

He is especially proud of the national title. “It went right down to the wire. With a couple of rounds to go there were still four or five of us who could win it. I enjoy the sport for the competition. I had a three year goal to win the title with the car and I have had a lot of help from a lot of people to be able to achieve it.” Hawkeswood’s business, Force Motorsport, built many of the AP4 cars that have revitalised New Zealand rallying and he says it has been “great to send so many cars out the door and compete against them.” While the title was a highlight he had finished in the top three of the championship on several other occasions over the years.

Hawkeswood’s son Jack will also line up in the field this year in another Mazda 2 AP4 car. “We looked at getting a Ford Fiesta or something similar for him but the cost to build a Mazda like ours compared well. It is a 2-wheel-drive, non-turbo version with a bog standard Mazda CX5 engine that cost us $250 and a really good gearbox and suspension. It is a good strong car – he rolled it ten times in total at Otago last year – three times on Saturday and seven times on the Sunday. The cars are fitted with a g force meter and the car hit the ground with such force it measured 13G’s. The safety equipment worked well and both driver and navigator walked away with bruising. The entire car was wrapped around the roll cage.”

Andrew keeps a wary eye on Jack’s progress and went and helped him in the recent Nelson Rally. “I really enjoyed it but I thought rather than sit around in the service park at Catlins I would do the event myself as well,” hence the addition of the reigning National Rally Champion to the field.

The rally will begin adjacent to Owaka Motors in Campbell Street, Owaka, at 10am on Saturday 11 August with competitors facing six high speed Special Stages over a total of 150 kilometres before the event concludes in Owaka at 3.44pm. The rally is Round 6 of the MRF Tyres Mainland Rally Championship and part of the Eastern Southland Car Club Rally Championship.