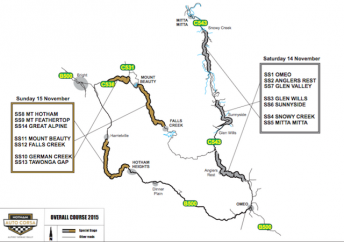 Promoted by Auto Corsa Group, the two-day tarmac rally from November 14-15 is expected
to attract a field of up to 80 classic and modern cars that will vie for outright glory and
individual category wins.

Crews will travel a total distance of 517 kilometres over the weekend, with 255 of those
broken up over 14 closed-road special stages.

Event Director, Stuart Benson, said that locals would have the opportunity to see the cars at
stops at Mitta Mitta, Mount Beauty, Omeo, Falls Creek and Mount Hotham.

“Our approach to course design ensures maximum efficiency for pre-event reconnaissance,
no stage repetition and, importantly, ample opportunity for locals to see the cars and rub
shoulders with the competitors,” he said.

“Local enthusiasts will also be able to catch the action from a number of spectator viewing
locations across the weekend.”

From Mount Hotham, the field will head east to the outskirts of Omeo. The Omeo Highway will
play host to a 6.3km warm up stage which will ease crews into competition, followed by a
further three highly technical stages taking in Anglers Rest, Glen Wills and Snowy Creek.

Following a lunch break in Mitta Mitta, the cars will complete the morning’s stages in reverse
finishing with the day’s longest stage, the 26.1km Glen Valley. A ceremonial finish will be held
just outside the Omeo Show on the Omeo Highway, and a number of cars will be on display
inside the Showgrounds from about 2.30pm.

Day two will produce a further technical seven stages over 141.9 competitive kilometres.
Crews will be re-started from Hotham Heights Village and head down the famed Great Alpine
Road, towards Harrietville taking in a 6.1km Mount Hotham warm up stage along the way,
followed by the 17.7km Mount Feathertop stage.

The cars continue along the Great Alpine Road before heading north towards the 16.5km
German Greek stage. The 28.5km Mount Beauty stage will see the cars ascend to Falls
Creek where the cars will stop for lunch.

Cars will then descend from Falls Creek, covering the 28km Falls Creek stage before regrouping
in Mount Beauty.

The field then commences its journey back to Mount Hotham for
official podium finish celebrations but not before completing the 16.2km Tawonga Gap stage
and the event’s final and longest stage, Great Alpine, which comprises a 28.9 kilometre climb
of Australia’s highest sealed through road, the Great Alpine Road.

Mr Benson said that the many months of consultation with local civil authorities and
community groups and associations had not only secured the rally route for 2015, but also
support for an extended course in 2016.

“It’s been great to hear from the top teams of tarmac rallying that have carried out
reconnaissance, that the combined character, construction, length and even scenery offered
by the very special stages of the Hotham Auto Corsa have no domestic rival,” Mr Benson
said.

“We very much look forward to working with our event partners and local stakeholders to see
the event grow even stronger into the future.”

“An important design element of the Hotham Auto Corsa is that it interacts with the
communities it passes through,” he said. “This visitation, both pre and during event,
stimulates activity and spending at a quieter time of year for the entire Alpine region.”

An official spectator guide, outlining safe viewing spots and times for road closures and
vehicle displays, will be issued via the event website www.autocorsa.com.au in October and
published in local media prior to the event.