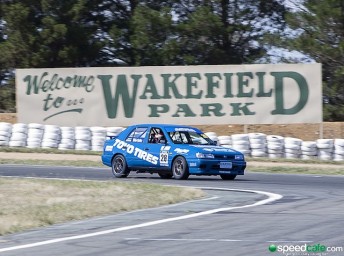 The first of the growing one make racing series’ 14 rounds will take place at Sydney Motorsport Park’s on 21 February.

The specification of competing cars in the series is tightly controlled to maintain a level playing field for all teams. The control tyre announcement was made to competitors during a tech night at Toyo Tires’ Minto, NSW headquarters.

Toyo Tires marketing manager José Angeles said the company was excited to be a part of a series shaping the future of Australian motorsport from the grassroots up.

“This is where the next generation of motorsport drivers are getting their start,” he said.

“The APRA series is inclusive and unearths talent that might otherwise be hidden by the prohibitive cost of being competitive in other motorsports.

“Toyo prides itself on delivering race-winning technology accessible to both professional and amateur racers. The Proxes R888R is a bolt on solution that will give club racers durability and consistent performance all the way to the chequered flag.”

“There is no way to gain a financial advantage in this series. It puts driving ability above all else. The series is attracting professional drivers who have driven in V8 Supercar development series, and karting, Aussie Racing Car and time attack champions alongside the next generation of Australian racing drivers.”

The series, which takes place across NSW, Victoria and Queensland, includes sprint races of six to 12 laps alongside one to two-hour endurance races – demands Mr Harmston said Toyo’s Proxes R888Rs will meet.

“Toyo Tires has a global reputation for motorsport and APRA is thrilled to be a part of it.

Our testing of the Proxes R888R shows it is the ideal choice for this series.

“It was faster, more stable and easier to manage. The grip is excellent and longer lasting in race conditions. Our racers will get a lot out of them,” Mr Harmston said.

For over 40 years, Toyo Tires has stood for innovation, quality, performance and excellent service in Australia. Today, Toyo Tires offers a complete selection of premium replacement tyres for nearly every make and model, manufacturing the highest-quality tyres for high-performance cars, family and luxury vehicles, SUVs and 4x4s, light trucks, and for trucks and buses.