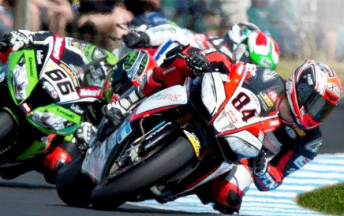 Motorcycling Australia (MA) is excited to announce that the 2015 Australian Superbike Championship (ASBK) will gain significant exposure thanks to a new television package for the series.

In 2015, the ASBK will have every round of its five-round series featured in a television show to be aired on Fox Sports.

The shows will feature action from the Superbike, Supersport, Moto3 / 125GP Junior classes, with up to two hours of coverage from every round.

The opening show, which will feature the ASBK action that is held in conjunction with the World Superbike round at Phillip Island, will air at the following times:

All subsequent rounds will have highlights packages shown approximately 14 days after each event, and specific scheduling information will be released closer to the event dates.

Speaking about securing television for the 2015 Championship, MA CEO Dale Gilson said the announcement was another huge step forward as the new-look series continues to gather momentum.

“It is no secret that 2015 is the beginning of a new era for road racing in Australia, as we look to re-develop one of our oldest and proudest championship series,” he said.

“Being able to announce a national television package to showcase all of the riders taking part in ASBK in 2015 is an integral part of this.

“This championship has continued to gather momentum and this is just another sign that things are on the up.

“And anyone who is unsure of what to expect from the ASBK this year and in the future can get in front of their television sets, or hit the record button to catch all of the action – starting on the 21st of March.”

The television shows will feature plenty of action, including feature stories, highlights of great racing and a behind-the-scenes look into ASBK in 2015.

For all the latest from the world of ASBK, stay tuned to the website via www.asbk.com.au