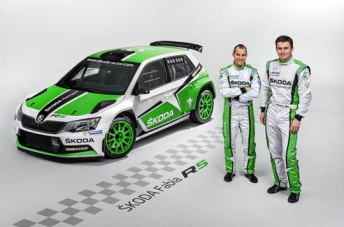 The brand new ŠKODA Fabia R5 will make its debut on the international rally stage at the home of the manufacturer in the Czech Republic.

Reigning Asia-Pacific champion Jan Kopecký (CZ) will be at the wheel of the new racing car on the 50th anniversary of the Rally Šumava Klatovy.

“We are delighted to now be able to test our new ŠKODA Fabia R5 at an actual rally, following the successful homologation by the International Automobile Federation FIA,” said SKODA Motorsport Director Michal Hrabanek.

“It is obviously particularly symbolic that our first outing will be in the brand’s back yard in the Czech Republic.”

The plan for this year is to test the competitiveness of the new rally car around the world, starting with the opening race of the Czech Rally Championship (MČR).

ŠKODA Motorsport will field the high-tech four-wheel drive car in the WRC 2 category at selected rounds of the FIA World Rally Championship (WRC), as well as in the FIA Asia-Pacific Rally Championship (APRC). However, the focus is first on the car’s debut in ŠKODA’s native Czech Republic.

Appropriately, the cockpit will also be occupied by a Czech duo when the car makes its debut: experienced rally driver and reigning APRC champion Jan Kopecký and his co-driver Pavel Dresler will take control of the car, which is powered by the new 1.6-litre turbo engine, at the Rally Šumava Klatovy.

“We are obviously very proud to be the ones to herald the next chapter in ŠKODA’s rallying success story,” said Kopecký, who won the rally back in 2012.

The 50th anniversary of the event features 12 demanding special stages, consisting of 150.71 kilometres against the clock. Jan Kopecký and Pavel Dresler will start all six rounds of the Czech Rally Championship in ŠKODA’s new rally car.