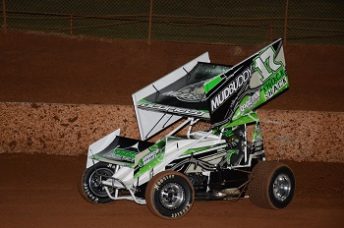 The wait is over! Racing returns to Ausdeck Patios Archerfield Speedway this weekend with a massive night of action scheduled for Saturday night (September 16) to launch the 2017/2018 season. With a huge open wheel program that includes the opening round of the East Coast Logistics Sprintcar Track Championship, plus three Monster Trucks and a spectacular fireworks show, the event is shaping as a fabulous night of family entertainment. Supporting the Sprintcar action will be the opening round of the Polar Ice Midget Track Championship, along with Formula 500s, Compact Speedcars and Formula 500 Juniors.

Drivers from three states, and as far afield as South Australia, are amongst the 28 competitors who will take on the challenge of the opening round of the East Coast Logistics Sprintcar Track Championship, all of whom will be looking to secure an early advantage in their bid to prevent Luke Oldfield from securing back-to-back series wins. Superb last season in taking the championship despite missing a round, Oldfield now finds himself the benchmark that must be met by anybody hoping to relieve him of his championship trophy.

Of course, having lost out to Oldfield in his bid to defend the track championship in a battle that went to the final round, Andrew Scheuerle will be determined to reverse that result this season and wrest the crown back. Racing as part of a two-car operation this season with team owner Stewart Craig back behind the wheel, Scheuerle will be primed to reclaim the championship trophy.

Whilst Oldfield and Scheuerle are rightly regarded as the pre-race favourites, look for the likes of Peter Lack and Brent Kratzmann to emerge as spoilers in pursuit of an early advantage. Lack was terrific last season, only to endure some misfortunes that ultimately prevented him from emerging as series champion, while Kratzamnn enjoyed a great run through the second half of last season and knows that a strong start this weekend will prove critical for his championship aspirations.

Needless to say, all of the standout young guns who emerged last season are back again, with Lachlan McHugh, Mitchell Gee and Callum Walker primed to continue the rapid ascendancy that seems certain to bring them many more feature race wins and podium results, while Sydney’s Michael Saller and South Australia’s Glen Sutherland are also amongst the entries, knowing that a strong showing in such tough company will prove a huge advantage when their local racing gets underway.

Although a little down in numbers, a solid field has nominated for the opening round of the Polar Ice Midget Track Championship, including defending champion Rusty Whittaker. Darren Vine, Scott Farmer, Scott Wilson, Reid Mackay and Adam Wallis, who replaces Chris Gwilliam in the #89 Nielson Motorsport entry, loom as Whittaker’s most likely challengers, although Mark George is a former state titleholder and therefore cannot be underestimated. Rob Stewart brings plenty of experience and Kristy Bonsey showed some good form in practice recently that suggests she might also be a contender.

Australian champion Liam Williams is set to continue his rivalry with James Kennedy in the Formula 500 events, with Kristin Brown, Ryan McNamara and Mitchell Whittaker unlikely to offer the pair any leeway in their own pursuit of feature race success. Undoubtedly the most improved race division last season, both in numbers growth and the quality of the racing, we can expect plenty of close competition again this year.

Compact Speedcars also showed solid growth last season and despite the absence of several category regulars, they have still gathered a solid 16-car field for their season opener. The experience of Wayne Corbett will be hard to beat, but the likes of Trent Usher, Jim Kennedy, Dave Collins, Riki Harrison and Emma Harris will be in the thick of the action.