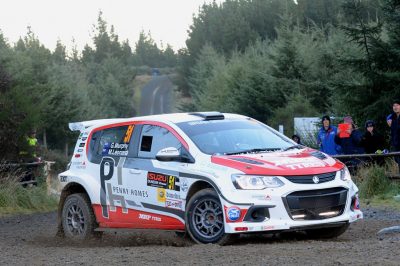 The one-day rally, running 23 June on closed gravel roads around Timaru, have not been part of the New Zealand Rally Championship for over 30 years. Neither Marston or Murphy, from Christchurch and Havelock North respectively, have ever contested the rally as a club event.

“Everyone is raving about the stages and the fast flowing nature,” says Murphy. “I have been told some of the stages at Otago resemble the event this weekend and I loved Otago, so I can’t wait and with the forecasted fine weather we should have fantastic conditions.”

Marston is equally enthusiastic about the 190km of competition which features 11 different stages.

“Having no repeated stages will be a good challenge,” says Marston. “I think being seeded seventh on the road will be a good spot to be, given the likelihood of a bit of gravel covering the stages, seeing as these are public roads closed just for the rally.

“It sounds like the stages are rather fast, so that’s good with me! Andrew [Graves, Marston’s co-driver] and I are looking to continue with the good rhythm we had at Canterbury where we scored our first NZRC win. The car setup is awesome and the Barina AP4+ is great to drive.”

Murphy and his Timaru-based co-driver Mark Leonard are looking forward to being back in their Barina again so quickly, with only three weeks since the previous NZRC round.

“Especially as we had such a positive weekend in Canterbury, hopefully Lenny and I will be able to keep the momentum going. This looks such a different rally compared to Canterbury so with no previous experience on these South Canterbury roads I think my expectations need to be realistic, especially with the competitive field entered. Saying that, I know the car is competitive so it will be down to me to do the job.”

Murphy is utilising Leonard and a local crew to maintain his car. “With Canterbury being particularly rough, our Timaru-based team have given it a thorough going-over, replaced a few consumable items and made the Barina look beautiful again.”

Over in the RDL Performance workshop in Christchurch, Marston’s Barina has also been through the check-and-maintain process to ensure it’s in good shape for its South Canterbury debut.

The Rally of South Canterbury has attracted more than 95 entries and kicks off with a ceremonial start in Timaru on Friday night before a 7.45am start for the top seed on Saturday morning. The rally concludes with a blast around the Levels Raceway on Saturday afternoon. The tarmac surface potentially suits Murphy’s circuit racing background, although like all other competitors, he faces the challenge of running laps on the tarmac track using gravel-spec tyres which have just completed the previous four gravel stages.