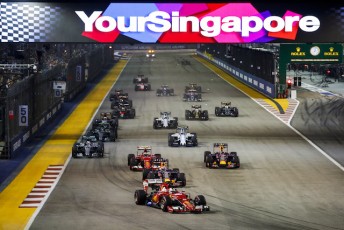 Singapore GP has collaborated with Red Bull Racing for a comprehensive four-day package featuring a host of
benefits for fans of the Formula 1® team.

Fans will gain an insight into the team’s preparations for the race whilst enjoying a gastronomic spread at the Red Bull Racing Hospitality Suite.
Guests will also receive a Turbo Seats Supporters Pack consisting of a cap, team flag and team lanyard so they
can show their support at the night race.

The package also includes a discount voucher that can be used to purchase official team memorabilia as
well as meal vouchers worth S$90 to be redeemed at the Marina Bay Street Circuit.

The Red Bull Racing Turbo Seats package is priced at S$1,925 and is available from today at
www.singaporegp.sg.

A maximum of five tickets are allowed per person.

About the FORMULA 1 SINGAPORE GRAND PRIX
Singapore has successfully hosted the inaugural night race in Grand Prix history and Asia’s only street race on the
Formula 1® calendar at the Marina Bay Street Circuit in downtown Singapore since 2008. Under the current
contract, the home of Formula 1® night racing is set to host a round of the FIA Formula One World Championship™ until 2017. For more information, visit www.singaporegp.sg.