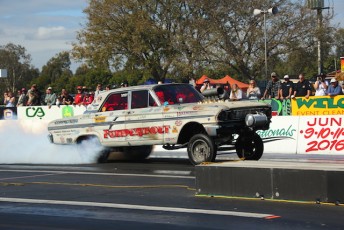 The new three-round series will provide a variety of nostalgia racing and plenty of off-track entertainment. pic: dragphotos.com.au

The series, sponsored by Cruzin’ Magazine, will significantly expand on the nostalgia racing activities currently enjoyed at what are two of Australia’s premier drag racing venues.

The first two rounds will be held at Willowbank Raceway on the 27th of February and 14th of August, with each racer to then carry the points from their best of these two events to a two-day final extravaganza at Sydney Dragway across the 10th and 11th of September.

As well as providing a wide variety of nostalgia racing, Willowbank Raceway and Sydney Dragway are also seeking to elevate the off-track entertainment on offer to ensure a complete and unrivalled package for both racers and enthusiasts.

“We are committed to making this the best nostalgia series around, and that means fantastic racing accompanied by a great off-track program.

“At the Willowbank Raceway rounds you will find a DJ, a drastically expanded Shannons Insurance Show ‘n’ Shine – which will be held in the Group One pits behind our main grandstand for the first time – a Cruise Session, lots of trade stands, and for our August event – a large swap meet as well.

“With this expanded package; the support of Cruzin’ Magazine behind all three events as naming rights sponsor; and nostalgia drag racing holding a special spot in the heart of Australian motoring enthusiasts; we are confident that the Cruzin’ Magazine Nostalgia Drags and Hot Rod Reunion will be the new ‘must do’ nostalgia series for this country.”

Sydney Dragway’s final round of the series will be held across two big days in September and coincide with the holding of the annual ANFA (Australian Nostalgia Fuel Association) Pioneer Awards night at the venue.

“After becoming involved in Nostalgia racing with Gavin from Cruzin’ Magazine around eleven or so years ago, I just love everything about the old school cars and the laid back environment that the scene represents,” said Sydney Dragway Chairman Joseph Rodriquez.

“As such, I am very excited about building this new series with Willowbank Raceway, and to be hosting the final round at our venue.

“There is sure to be some very close racing across the two days, and a great variety of racers – you might even see some nitro on the track – and the ANFA Pioneer Awards on the Saturday evening always drawing an enthusiastic and nostalgia crowd, I think this weekend will be one ‘not-to-be-missed’ for all fans of this very special part of Australia’s motorsport culture.”