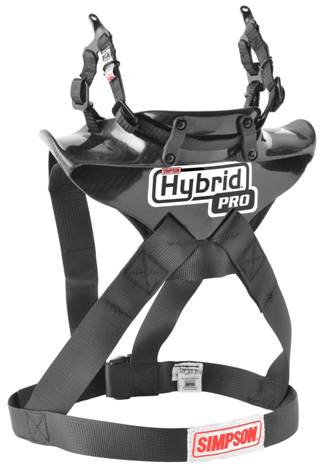 With CAMS mandating frontal head restraints down to state level racing and rallying from January 1 this year, Simpson’s Hybrid Series gives competitors a long-overdue choice in the marketplace – and sets new standards in protection and comfort..

The Hybrid is the first significant advance since the original FHR appeared more than two decades ago, according to Greg Yard of Simpson Safety Equipment Australia.

“The Hybrid takes the concept to the next level, with a design that transfers the bulk of the impact load to the wearer’s safety harness instead of the body.

“It avoids chest injuries that can be caused by a rigid yoke rotating forward in heavy frontal collisions.

“And it provides superior protection in side and offset crashes.”

“Another benefit is the compact size that eases entry and exit from the car, with less risk of tangling with other gear.

”The Hybrid is designed for maximum comfort and manoeuvrability, and can be custom-fitted for female competitors,” Mr Yard said.

The Hybrid range has been certified by major Australian and international motorsport controlling bodies, such as the FIA, CAMS, Speedway Australia and ANDRA.

CAMS Chief Executive Eugene Arocca has endorsed the universal use of FHRs.

“Personally, if I was competing at an event I would use a frontal head restraint irrespective of the level of motor sport,” Mr Arocca said in a CAMS press release in April last year.

The Hybrid was launched internationally in 2014, and already leading competitors across a variety of categories have switched to the new product.

Prices for FIA-approved Hybrid models currently range from $899 for the entry level Hybrid Sport, to $1399 for the Hybrid Pro Carbon.

A limited range of SFI-certified Hybrids is also available.

Hybrids can be bought from Simpson Safety Equipment Australia in NSW, and distributors in Victoria, South Australia and Western Australia.

A three-instalment payment plan is available for competitors on tight budgets, while those who want to try before they buy or only need a head restraint for the occasional event can ‘hire a Hybrid’.

“Simpson has been synonymous with motorsport safety equipment for more than 50 years, and the Hybrid Series continues that tradition,” Mr Yard said.

· Gravel rallies: International, national and state level, except where specifically exempted due to the type of vehicle.

For more information, go to www.simpsonraceproducts.com.au