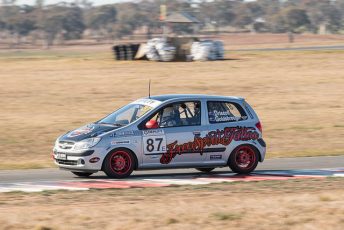 Acco Motors of Batemans Bay (NSW) will debut the first Hyundai Getz to compete in the Australian Production Cars when the series hits Sydney Motorsport Park next week for its third round of 2017 – the Tyreright Sydney Challenge.

Consisting of four x one hour races, the Tyreright Sydney Challenge will be held across July 7-9, with drivers James Goldsbrough and Gavin Driscoll naturally looking for a positive debut.

“With July 7-9 being the first major endurance event for the Getz, we are hoping to have a trouble-free weekend while we learn the APC ropes,” said Goldsbrough, who thanks Free Spirit Tattoo and Penrite Oil for their ongoing support.

“We will be continuing the development of the car for the remainder of the year, with a view to a more comprehensive competition calendar next year, starting at Bathurst. Endurance racing is where our team’s passion lies so the APC is where we want to be competing.”

While certainly hunting for a drama-free beginning, Goldsbrough does not sell the Class E Getz short in its potential capability in the APC.

“The Getz loves running at SMP. Despite being a small car, the wide and flowing design of the circuit suits us well, and we can spend a long time at full throttle,” Goldsbrough explained.

“Despite not having the most powerful motor, the car has fantastic braking, which we think gives it an edge. The four-wheel disc setup is especially suited to endurance events, and we can really lean on the brakes lap after lap.

“Reliability is the key to consistent results, which in turn is the key to success in a point score situation; we feel that the Hyundai will provide us with the reliability we need to finish strongly in a championship situation. Also, nobody else has one, so that is always cool!

“The competition in Class E is tough, with many teams being seasoned campaigners in compacts. It will be hard to become competitive, I think, because the level of knowledge and experience of the other teams is so high, but that won’t stop us doing all we can to be in the mix!”

For Goldsbrough, the APC is a natural place for the Free Spirit Tattoo Hyundai Getz.

“The APC provides a great series each year, and they are constantly striving to give more variety, more value for money, more rounds per year, and more track time per round,” Goldsbrough said.

“The endurance format of the rounds in the series is especially appealing to us. We are expecting the series to provide a highly professional, well-run event.

“As newcomers to professional motorsport, after having been active at the amateur level since 1994, we have so far found the whole team behind the Series to be very welcoming and more than eager to answer our questions – no matter how obvious!” he laughed.

After so far enjoying a six-hour race at round one and two 300km races at round two, round three will host four x one hour races.

“I think the format of this round is interesting for sure – having different race formats can really show the strengths of each vehicle, which is the best thing about Production racing in my opinion,” Goldsbrough said.

“While this weekend is probably not going to play to our strengths (we are the tortoise, not the hare!), it is great to have variety in the series and to showcase differences in vehicles and classes.”

The Free Spirit Tattoo Hyundai Getz and the rest of the APC field will hit Sydney Motorsport Park for the Tyreright Sydney Challenge across July 7-9. Spectator on Friday is FREE and only $15 for Saturday, $25 for Sunday or $30 for a weekend pass. All of Sunday’s action will be streamed online live and free via thenationals.com.au