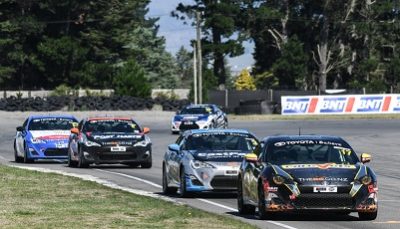 Three new drivers – one an international – have signed up for the final round of the 2017-2018 Toyota 86 Championship, boosting the final round grid to 15 and the whole-series stats to a record 22 entries.

The international entry is Broc Feeney (15) from Australia, who is stepping up from a karting career aiming to race the Australian 86 series and is keen to get some ‘seat time’ in the New Zealand Championship as well. Australian Junior Karting Champion Feeney will drive the No. 93 Neil Allport Motorsport-prepared Toyota 86 for the final round of the Kiwi Series, in what will be his first race out of karts.

“The opportunity is a unique one – I didn’t expect to be making my car racing debut in New Zealand,” said Feeney.

Kiwi Calum Hedge has stepped up from Formula F1600 to make his Toyota 86 Championship debut. Hedge (14) is one to watch, having become the youngest ever New Zealand Formula F1600 Champion at Manfeild a month ago.

Another driver making his 86 Championship debut this weekend is Matt Griffin, 26, of Pukekohe. Griffin has extensive single-make racing experience and has twice won the BMW E30 Series. He is also an accomplished endurance racer with the North Island title to his name.

Adding further to the spectacle are a number of drivers returning to the Championship.

Auckland’s Jacob Smith (18) returned at the previous round after a long recovery from back surgery.

Tom Alexander has sorted the issues that slowed him mid-Championship and is back, aiming to score some race wins.

Aucklander Ben MacDonald is also back, having run at the opening round this year.