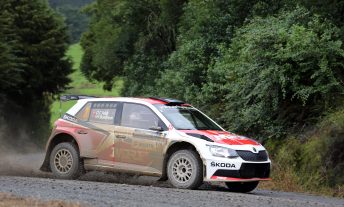 Based in Canberra, the event is the second round of the 2017 Asia Pacific Rally Championship, and comes following Team MRF’s dominating 1-2 finish in the opening round in New Zealand in late April.

The Australian round of the series has previously been held in Queensland, but returns to Canberra this year, ensuring that no driver will have the advantage of having contested the event before.

Gill, from India, is currently on a winning streak of seven consecutive APRC events, and is fully in sync with the team’s Skoda Fabia R5.

He and Belgian co-driver, Stephane Prevot, were in hot form in New Zealand, and will be looking to continue that winning form this weekend.

For 20-year old Norwegian star Veiby, the rally is yet another step up the ladder in a rapid learning curve that has already seen him take two top five placings in the World Rally Championship’s WRC2 category.

Both drivers completed a successful test session near Canberra on Wednesday morning, and after heavy overnight rain they both found a good set up with their cars.

Gill will start the event as the first car on the road, with Veiby in third position.

“The rally will be an enthralling battle between Gaurav and Ole, as neither of them has contested this event before,” Team MRF boss Lane Heenan said.

“Canberra has a reputation for being an event that is hard on cars, with stages that can cut up, particularly on the second pass of stages.

“It will be a test of both drivers to find that fine line between maximum speed and being conservative. It promises to be a great battle.”

The weekend’s weather forecast is for frosty mornings followed by clear, blue skies and a maximum temperature of around 15 degrees Celsius – perfect conditions for rallying.

The National Capital Rally covers 14 competitive stages, with eight on Saturday’s Heat One across 111.48 competitive kilometres, and six on Heat Two across a further 120.92 kilometres.

Team MRF’s biggest competition over the two days is expected to come from Finnish star, Jari Ketomaa in a Mitubishi Mirage AP4.

APRC series points after round one: