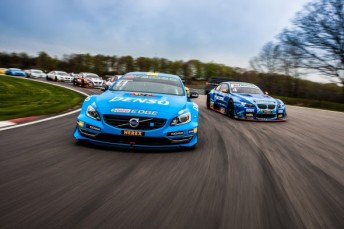 The 2014 Scandinavian Touring Car Championship season starts this weekend and reigning champions Volvo Polestar Racing are ready for the challenges with drivers Thed Björk, Fredrik Ekblom and Prince Carl Philip Bernadotte.
“Volvo Polestar Racing are ready for the 2014 STCC that has gone through one of the biggest changes in the history of the championship in terms of drivers. Our three drivers are going to face new and young drivers and teams this year. The challenge is great, but we have strong confidence in our line-up and the goal is crystal clear: the 2014 STCC title,” said Derek Crabb, Motorsport Director of Volvo Cars.
Thed Björk is the reigning STCC champion after an exceptional season last year with eight out of 12 victories. The 33-year-old is aiming to become the first driver in nine years to take a second consecutive STCC title.
”My goal is to take a second straight title this year. There are many talking about the regulation changes and that you have to drive differently to take the title. Not for me, it is all about being fastest and my strategy is clear. The challenge is going to be tough of course, but I have the goal set to carry the feeling from last year and to fight for victories from the season start to the season finale,” said Björk.
The regulations for qualifying and races have changed for this year where all race weekends consists of two races of 20 minutes each compared to last year where half of the race weekends had a single race of 40 minutes.
New for 2014 is also the introduction of reversed grid which is connected to the new qualifying system. Two qualifying sessions will be held, Q1 and Super Pole. The eight fastest drivers of Q1 goes on to the Super Pole which decides the grid for the second race of the weekend. The grid for the first race is decided by reversing the top ten drivers of the Q1 session, meaning that the tenth fastest driver starts from pole and the fastest driver starts from tenth position. Another change is that points are awarded to the top ten drivers of the Q1 session.
Triple STCC champion Fredrik Ekblom is like Björk unfazed by the changes in regulations and is focusing on his burning desire for revenge after a troublesome 2013 season.
”The changes in regulations are of course going to mean different conditions and a different strategy in some situations. But in the end it is all about being fastest and to score points consistently. Last year was a disappointment for me, the speed was there but I had no luck. We are going to turn that around this year and I am going for the title, there is nothing else,” said Ekblom.
Prince Carl Philip Bernadotte starts his second ever STCC season and hopes to take a step forward in terms of speed and consistency.
”I have many good memories from last year, the season start at Knutstorp was very special for me to race on the top level and meet the very best racing drivers in Sweden. A couple of races after that and I scored my so far best result with seventh at Falkenberg, a memory I hold dearly. For this year I am aiming to continue to build experience and take a step forward in terms of result with more consistent top ten finishes,” said Prince Carl Philip Bernadotte.
The first STCC weekend of six in 2014 starts this weekend with testing and qualifying on Friday, followed by two races on Saturday.