“One of the best things for me is to learn new circuits and to start the season with a brand new airport circuit suits me perfectly, especially as we have a lot of Volvo fans and partners in Skövde,” said reigning champion Thed Björk.

Björk claimed his second straight STCC title last year and is aiming to become the first ever driver to win three straight titles, a feat no other driver has accomplished in the 19-year history of the championship.

”My goal is to become the first with three straight titles. But that is not something that I am focusing on now, but rather to do my best and score the best possible in each race.

“And that is no easy task, I have driven too many STCC seasons to take anything for granted and the opposition in the top is as tough as ever this year. But I feel confident ahead of the weekend, I had a really good pre-season test,” said Björk.

But Björk is not alone in having high ambitions as team mate Fredrik Ekblom has his sights set on a fourth STCC title.

”My goal is as always on the top step. But there is more to it than that of course, it is just as important for us to together win the team title for Volvo and Polestar,” said Ekblom.

The triple STCC champion had a tough season last year, stopped by mechanical failures and incidents, but still won as many races as team mate Björk.

”Last year was tough and there were many factors to it. But I have put that behind me. I had the pace to win all season last year and I had a great pre-season test this year. I am more than ready for the season start,” said Ekblom.

Prince Carl Philip starts his third STCC season this year and comes boosted by a strong pre-season test two weeks ago where he was seventh fastest overall.

”I was pleased with the test and that is of course a boost ahead of the season start. Adding to the excitement this weekend is the new circuit and I am very much looking forward to start racing again,” said Prince Carl Philip.

A total of 13 drivers from seven teams, representing Volvo, BMW, Kia, Dacia and Saab, will take part in the 2015 STCC season start at the all-new STCC Volvo Race Skövde this weekend.

The circuit is located in Skövde, one of the key cities for Volvo in terms of manufacturing and partners.

”Skövde is one of the most important races of the calendar, especially as it is the home race for many of our partners and we are excited to get to an all-new circuit. We have a stellar line-up for the season and look forward to start our charge to challenge for the 2015 STCC titles,” said Christian Dahl, CEO of Polestar. 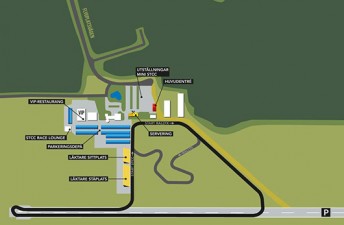 There are some changes in the championship this year, join us as we walk through them:

A new airport circuit
The season start will take place at the all-new STCC Volvo Race Skövde. The circuit features a high-speed layout, see above for a circuit map, that will put high demands on the drivers to learn during the race weekend without any prior experience or data to rely on.

New tyres
A new tyre manufacturer has been introduced for the 2015 season with Michelin replacing Yokohama. The drivers have so far reported no major differences between the tyres, but with limited pre-season testing, the duration and behaviour during race runs is an unknown so far.

Twilight race
Another change is the introduction of a single day twilight event at Mantorp Park. The third race of the year on June 25th will be held over one day with qualifying in the morning and races in the evening, using the short circuit of Mantorp Park for more action to the spectators.