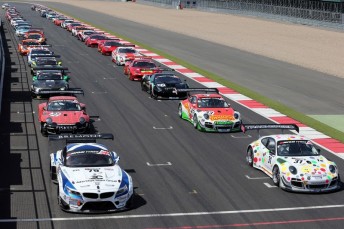 The third round of the Avon Tyres British GT Championship is set for a bumper grid with extra entries including new teams and familiar faces in different machinery for the three hour Silverstone 500 race on June 1 at the home of British motorsport, Silverstone.

With a current provisional entry list of 35 cars and growing, the high-speed challenge of the Silverstone track will reverberate to the sounds of V12s, V10s, V8s, V6s and flat sixes in the third round of what is arguably the world’s best national GT championship.

Cars making a return for the three-hour race on Sunday afternoon (14:15 – 17:15) include the #3 Rosso Verde Ferrari 458 of Hector Lester and Benny Simonson, the #17 M-Sport Bentley Continental and the #22 Preci-Spark McLaren MP4-12C of the Jones brothers.

New entries for this event include the swelling of the United Autosports ranks with the return of 2011 champion Jim Geddie and son Glynn in their McLaren MP4-12C which was last raced In British GT at Silverstone in 2012.

In GT4 the ranks will be swelled with another Porsche 911, with the return of the APO team with the #69 car of James May and Alex Osborne making a return for their home race with a new marque from their previous Ginetta outings.

It’s not just another Porsche, but another Aston in GT4 too with new team Track Group entering the #50 Aston for Bolaj Adunsi and fan favourite Paul O’Neil with an Aston GT4.

Tickets for the Silverstone 500 can be bought online from bit.ly/1nRBtLp.

Jim Geddie, #23 United Autosports McLaren MP4-12C
“It’s great to be back in the Avon Tyres British GT championship again, especially to be racing with United Autosports. Glynn and I have always wanted to get back into the championship since we won the title in 2011, and now seems like a good time to do that. There’s some great drivers out there now so the competition will be tough but we are confident of a good result.”

Glynn Geddie, #23 United Autosports McLaren MP4-12C
“I’m really looking forward to being back in the Avon Tyres British GT championship with my father again. Obviously, I was racing last year but to be back with my dad is great. We have wanted to get back into the championship for some time now and this opportunity at Silverstone seemed like the perfect time to do it. Hopefully we can get a good result at a track we both love.”

James May, #69 APO Porsche 911 GT4
“Both Alex [Osborne] and I are really excited about being back, it’s been horrible having to sit on the sidelines and watch the first two rounds but it was sadly out of our control. Due to our driver pairing and the added ballast that came with it last year was a tough one, we however have a new car and new sponsors for this season and can’t wait to get going, especially at our home circuit Silverstone! We have loads of guests coming and it should be a great weekend, hopefully with a debut win!”

Stephen Docherty, Team Manager, #50 Track Group Aston Martin GT4 Challenge
“Track-Club are delighted and honoured to take their first step into the Avon Tyres British GT Championship. The team specialises in taking drivers from the very early stages of trackday driving through a structured program to allow them to compete competitively and safely in one of the foremost GT Championships in the world. The Silverstone 500 is the first step of a plan to run two cars in GT4 in 2015. We see GT4 as a great balance of speed, budget and profile for amateur or up and coming drivers that want a professional racing program at a sensible budget. Some of our drivers have a long term goal of competing at Le Mans and British GT is now an essential stepping stone along that path.”