New breed of ASBK talent on the rise

New breed of ASBK talent on the rise 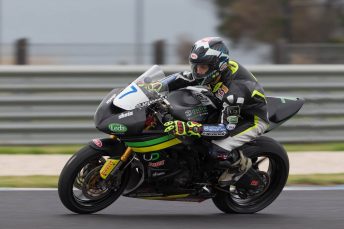 With the premier Yamaha Motorcycle Insurance Superbike ranks stacked with Australia’s leading domestic line-up, the Motul Supersport and Supersport 300 series will both also fire into life alongside the opening round of the Motul Superbike World Championship this weekend.

It’s shaping up to be a historic season in the Superbikes as a mixture of national champions, race winners and some well-rated rookies all take to the grid for their shot at glory, while for those in the Supersport divisions, their sights are firmly set upon gaining the experience and credentials to one day take-on the sport’s top national category.

“The plan is to keep doing the best job that we can and it’s all new for us this year,” Mitchell commented. “Working with DPH Motorsport is completely new for us, but the approach is to do the best job we can at each round – hopefully it’s enough to land us on top. If not, we know what to work on, and it’s a matter of focusing on the little things. For me, right now, I am focusing on Supersport, but will definitely follow the Superbike class as closely as we can – that is the next goal in my career.”

One rider who is pulling double-duty between the traditional Supersport division and the new-look, entry-level Supersport 300 category is Zac Levy, who won the inaugural YMF R3 Cup last season. The Queenslander will campaign Yamahas in both classes as he looks to add more trophies to his cabinet.

“Getting on the 600 was the obvious next step in my career, but to keep our options open -considering there is a WorldSSP300 series now – we decided to do both classes,” Levy explained. “We will take this season as a learning year on the 600 and see what happens in the future. With so many strong teams in the Superbikes, the national level is coming up and it’s looking promising for us young guys moving up through the ranks.

The addition of Levy to the Supersport 300 series sees him go head-to-head with defending Over 300 champion Brandon Demmery (Yamaha), as Kawasaki-mounted Drew Sells is also due to defend his Up To 300 crown this season. A fully-subscribed grid of 48 entries have entered the opening round.

The Motul Supersport class will feature a trio of 10-lap races over the course of the weekend, while Supersport 300 is set to do battle over three eight-lap races, amidst the premier Australian YMI Superbike, World Superbike and World Supersport championship categories.

To purchase tickets and camping for the Yamaha Finance round of the 2017 Motul Superbike World Championship visit www.worldsbk.com.au or Ticketek. Check the new-look www.asbk.com.au for detailed information on the 2017 Yamaha Motor Finance (YMF) Australian Superbike Championship presented by Motul Pirelli (ASBK)