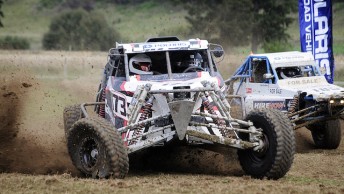 MEDIA RELEASE: Nelson racers Nevil Basalaj and Darrin Thomason have won their classes in the opening round of the 2016 Polaris New Zealand Offroad Racing Championship, held in Tadmor Valley near Nelson on Saturday.

The southern contingent – drivers from Nelson, Christchurch and Otago – saw off a strong challenge from four northern ‘Raiders’ who brought their race cars and trucks south from as far away as Hikurangi, north of Whangarei.

The North Island drivers had come south to contest the event, aiming to take home points and trophies as part of a northern invasion of the championship’s southern rounds, but found themselves in the thick of crash-and-bash action in the top classes.

It was local driver Nevil Basalaj who won the unlimited race car class for the weekend in his Jimco Chev despite a determined push from Clim-Tristan Lammers who won the first unlimited class heat but collided with Basalaj in the second, the impact launching his car skyward and shredding Basalaj’s front tyre.

Lammers was out of the race with a smashed front right suspension; Basalaj completed the heat on the flat tyre.

The pair continued their rivalry in the final two heats, including the all-in feature race which was won outright by Basalaj, who netted 61 points.

Another Nelson driver, Ash Kelly, rolled his Cougar VW Evo but recovered to finish second in class, just one point behind Basalaj. Also racing in that class and making a debut of his new Mazda rotary-engined car was former national champion Daniel Powell of Christchurch. His day was cut short with clutch problems.

The class also saw the two biggest crashes of the day, with Andrew Johnstone making contact with northerner Grant Rosenburg in one heat and Rosenburg returning the favour in the all-in final.

Mike Blackmore of Christchurch won a heat in his Honda V6 truck, but a consistent performance by Bryan Chang had put him out in front on points, finishing the day with 68.

4WD Bits Class 2 for production utes and four wheel drives was won by Ron Crosby in his Mitsubishi Pajero
Class three for race cars with engines up to 1650cc was won by seasoned racer Wayne Moriarty of Christchurch, with Nelson’s Greg Winn just five points behind and northern raider Brendon Old third and a further one point adrift.

4WD Bits class 4 was won by Nelson’s Darrin Thomason in a Mitsubishi Pajero, netting 70 points (the second highest tally of the weekend).

Class 5 for race cars with engines up to 1300 cc was won by Christchurch’s Clint Densem, equaling Thomason’s tally with 70 points for the weekend.

V Dub Shoppe Class 7 for cars with engines up to 1200 cc (VW) or 1000cc (water cooled) was won by the youngest driver in the event on his championship debut, Ray Tavinor (16) of Christchurch, who amassed a full 72 points across the four heats.

The Challenger class for cars with 1600 cc VW engines, also backed by V Dub Shoppe, was won by Brad Harvey of Christchurch who joined Thomason and Densem with 70 points for the weekend.

The third round of the championship is the Woodhill 100, which takes place north-west of Auckland during Queen’s Birthday Weekend.