Nelson doubles up at AKC in Ipswich

Nelson doubles up at AKC in Ipswich 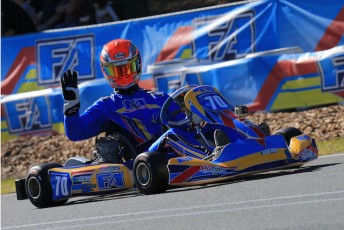 Brendan Nelson crossing the line to win his fourth straight TaG 125 round. All pics: Coopers Photography

MEDIA RELEASE: Queenslander Brendan Nelson has edged closer to a third Australian Championship in TaG 125 after a dominant performance at the penultimate round of the Australian Kart Championship in Ipswich, which saw him double up winning both TaG and the X30 category.

Other Championships are delicately poised after a hectic weekend of competition.

Car staged a spirited come from behind drive after a startline skirmish to finish second in the final and thus kept the Title chase alive as it heads to Melbourne in September. 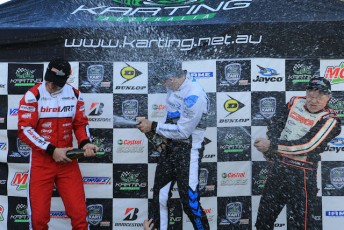 In X30, the FA Kart-mounted Nelson got to the front at the start of the race and delivered a superb victory beating home Leigh Nicolaou and local Ipswich Kart Club member, Adam Mercer.

It will rank as one of Nelson’s most dominant weekends from throughout his storied career.

In KZ2, Marijn Kremers has staged a late run for the Championship with a stunning win in Sunday afternoon’s 25-lap final.

The Ricciardo Kart driver had to work hard to make it his second round win on the trot.

Team CRG Australia’s Pierce Lehane got the jump from the front row, before Chris Hays got into the lead.

BirelART/Patrizicorse driver Hays looked on target to take his sixth career KZ2 victory before Kremers hunted him down, snatched the lead and went on to record victory. 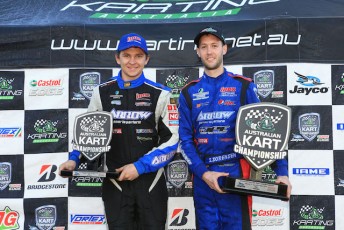 It was a victory made even more special with President of BirelART International Ronni Sala on hand to witness.

The result also meant that with Championship leader David Sera being off the pace all weekend and finishing 12th, Kremers and Hays are equal on points in second and are both just 23 points behind Sera heading to Melbourne.

Jack Doohan took his third win in succession in KA2 Junior. The Red Bull-backed Kosmic pilot won by more than six seconds and has all but wrapped up the Championship.

His closest rival – Harrison Hoey is 54 points behind the Gold Coaster. With 75 points up for grabs at the final round, Hoey is still in contention for the Title.

In KA1 – Scott Sorensen took an easy, but emotional victory in his HDR Arrow Kart.

Sorensen dedicated the win to his mother Robyn, who was in hospital this weekend after an operation during the week.

It also was the 10th anniversary of the establishment of the Harrington Doyle Racing team.

It was the third year in succession that Sorensen has been crowned the Queensland Champion in the class.

Second place in KA1 was Marc Tulloch – who had his best run on home soil in his Ricciardo Kart.

Defending Australian KA3 Senior Champion, James Sera elevated himself back to the top step of the podium after a great battle which could have seen any one of five drivers take the win.

Matt McLean (Arrow) had the early running and his fellow Victorian – Tony Kart-mounted Spencer Ackermann was running inside the top three for some time before Sydney-sider Matthew Waters came on the scene.

The multiple-time Australian Champion had his Redspeed hooked up and staged a run of fastest laps to work his way through the field. 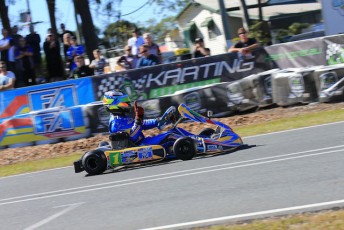 James Sera crossing the line for victory in KA3 Senior

Ultimately, Waters got himself into third position. It looked at one stage as though Waters may have had the speed to take on McLean and Sera, however he had to settle for third.

Heading to the final round, McLean has taken the Championship lead over Cody Donald – another Title that will go to the wire.

Scuderia PCR Australia KA4 Junior driver, Benito Montalbano took his first victory in the class after a hard fought weekend by all competitors in the class.

He and CRG Australia driver, Zac Crichton were locked together for much of the race until a trio of drivers decided to join the party.

The trio were able to take on the two front-runners and stage a last lap thriller that has become customary in the category.

Through positional changes for the minors, Montalbano pulled clear, however the big loser was Crichton, who was shuffled from second to fifth in the last series of corners. 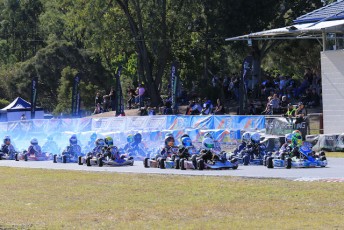 Smith emerged second with Webster third. By virtue of Worton’s fourth placing, Montalbano has taken the lead in the Championship.

Shamick Racing CRG pilot, Kai Allen is another to edge close to an Australian Championship after finishing second to his season-long rival James Wharton in Cadet 12. The pair were part of a fascinating race with Victorian, Fletcher Harris.

The trio traded places at various stages of the race, however Wharton emerged victorious over Allen and Harris.

Allen’s closest rival, Kobi Williams was shuffled back during the course of the race and came home in sixth position.

In Cadet 9, Ryan Tomsett emerged victorious after a battle with Alex Ninovic and Dominic Attard. The Championship rivals traded places throughout the course of the race. It went right down to the wire, however fell the way of Tomsett. 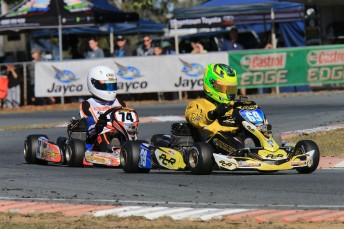 It sets up an interesting Championship fight at Todd Road between the New South Wales based duo – with a handful of points separating them.

KZ2 veteran John Grother was involved in a high-speed incident during the fourth heat that caused a
red flag and required attention from the first aid crew on hand. Grother was released with nothing but shock and soreness.

Overall, the penultimate round of the Australian Kart Championship presented by Jayco and Castrol EDGE was a success, with big crowds turning out each day.

For most classes, all roads lead to the Port Melbourne Karting facility over the weekend of September 23-25 – where the Championship chase is set to come to an incredible crescendo.

On-demand video coverage from each race today is available at www.karting.net.au.