Near perfect weekend leaves Audi on top after Sydney

Near perfect weekend leaves Audi on top after Sydney 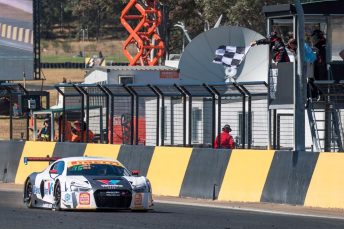 Victors at the opening round of the season at Phillip Island, Miles and Evans again combined in the Valvoline Jamec Pem Audi R8 LMS to win what proved to be the longest race in Australian GT history.

“We had a very disciplined strategy which we stuck to, pitted in a reasonable position, and then Jaxon took over and was able to chase the guys ahead of us down and get the win which is fantastic,” said Miles.

After being turned around at the opening corner, Emery handed the #74 Audi R8 LMS handed the car to van der Linde as the team quickly changed tact, van der Linde putting in the performance of the race.

From last in the train, van der Linde carved his way through the field, claiming the race lead inside of ten laps in a staggering performance.

“After the first lap we were the underdogs,” van der Linde admitted. “That’s why I drove the wheels off it and didn’t really worry about saving tyres or fuel.”

Emery held the lead for a long period, ultimately recording a strong third place to make for two Audis on the podium.

Such was Audi’s strength that the three of the top four belonged to the four-ringed marque, courtesy of Gaunt and O’Keeffe.

On debut in the Australian Endurance Championship, O’Keeffe quickly adapted to the pace of the Audi, enjoying his first outing in a GT3 spec machine.

“All the aero grip and braking grip is phenomenal too and the driver aids like ABS and Traction Control are really cool,” O’Keeffe enthused.

“It took me a while to get used to the car at the start of the weekend, especially passing other cars.

“In the race we managed to get past a few cars and got into fresh air where I felt very comfortable.

“Hopefully I will be back in one of these cars next year; I really enjoyed the weekend and it was quite exciting. “

Equally impressive was Gaunt, who worked hard to chase down the leaders in the closing laps despite battling the flu.

“It was a great race and I had fun doing it,” he said. “Dylan did a great job in his stint and we stayed out of trouble.

“Practice was good, obviously we went a little backwards in Qualifying and then had a good race car underneath us.”

A safety car late in the pit stop window, combined with the rapid tempo of the race, saw Greg Taylor and Grant Denyer caught out in the GT Motorsports entry.

Taylor started the race with a solid opening stint, logging an impressive 60 laps before stopping for fuel.

He then climbed from the car, handing it to 2016 champion Denyer, who backed up Taylor’s effort in his first experience aboard an Audi R8 LMS.

Two wins in as many starts leave Tim Miles and Jaxon Evans at the top of the championship standings with a formidable 84-point advantage, while Geoff Emery remains well in contention in third with 317-points to his name.

Audi Sport Customer Racing Australia now heads to the final round of the CAMS Australian GT Championship at Sandown (September 15 – 17) where Geoff Emery will look to claim the 2017 title for Valvoline Jamec Pem Racing.