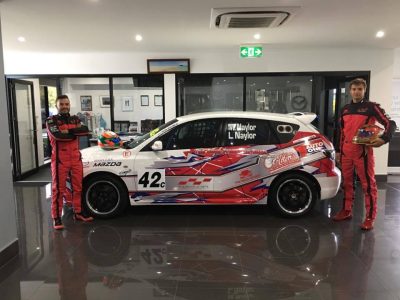 Queensland Raceway has seemed to have it in for the Naylor brothers from north Queensland over the last few years, but Mitchell and Leigh say they have a feeling that will all change this weekend.

The brothers will take to the Ipswich circuit this weekend (July 27-29) for round two of the 2018 Jacuzzi Spas Australian Production Cars, competing in Class C aboard their #42 Naylor Racing Mazda 3MPS.

“A lot of our troubles at QR have come down to inexperience. We made a huge mistake by not brining enough brake calliper components to get us through the weekend last year, especially for such a heavy braking track,” Mitchell explained.

“We had a brake fire which ultimately caused a DNF just because we didn’t have another set of piston seals to replace before the race. Then there was the overtightening of the wheel nuts to the point where our studs have given in and we lost a wheel – it has just been avoidable things like that.

“Although we’ve had it rough at QR to date, we feel like we have finally got our program together and we are ready to have a solid finish. We aren’t even thinking about our bad history with this track, it is all onwards and upwards from here as far as we are concerned.

“We are hugely confident of breaking through for a successful weekend this weekend. We have got everything we need to win this time: a very fast car which we feel is finally ‘endurance-reliable’, tonnes of essential spares, an experienced crew and…” laughed Mitchell, “…of course two of the best drivers around!”

Contributing to the Naylor’s confidence will be the fact that the Queensland Raceway layout is well-suited to their Mazda 3MPS.

“QR is perfect for our car. We probably have some of the best legs in a straight line out of all the class C cars there and the car has got excellent top end speed so we can capitalise on that power with the big straights at QR,” Leigh explained.

“Mitch and I love the night racing. It just adds to the excitement and is something a little different.

“Of course we want to win, and we expect nothing other than that. We don’t spend all this money and travel from Cairns to just have a run around and get some seat time. We put blood, sweat and tears into our family run team, and expect to start seeing the solid results we have been working so hard on achieving soon.

“A combination of university, family businesses and illness saw our family unable to compete at Sandown earlier this year, but we will be competing more this year and that all starts with QR this weekend.”

The Jacuzzi Spas APC last played host to the Naylors at the 2017 season finale at Wakefield Park.

“We have made a few little changes to the car to improve its reliability, from brake components to air ducting,” Mitch explained.

“We are super confident the car should tackle the QR weekend no worries, and hopefully at the front if all goes to plan.

“As for the team, we have got a very experienced team together for Round two. We have brake, suspension and mechanical specialists flying from all over the country to team up with us for the weekend. This also adds to our confidence – it should be a great weekend!”

“Brad’s Auto Electrical have gone far and beyond for our team. He is always willing to chip in and donate any parts or devices we need to keep us on the road, not only with the race car but also our transporter. He has been a legend and we couldn’t do it without his support.

“Mareeba Mazda and Mitsubishi have also been excellent with us. From providing funds and donating parts, we cannot thank them enough. I also have to mention Southside Electrical and Air. They have been our major sponsor since our first Australian Production Cars event and are always offering to pay for anything we need.

“Of course we need to thank everyone else who has also chipped in along the way, it all makes a huge difference for us. Hopefully we can bring home a result at QR this weekend to say thanks!”

Round two of the 2018 Jacuzzi Spas Australian Production Cars will be held at Queensland Raceway across July 27-29, with two 300km races to be held over the weekend, including the infamous ‘Fight in the Night’ on Saturday evening.