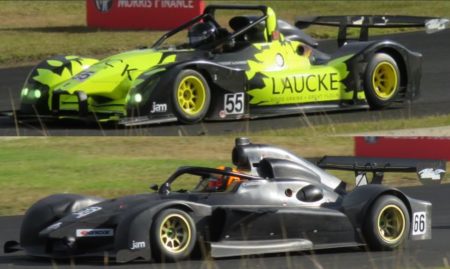 Mark and John Paul will be bringing their incredible F1-standard Italian-made carbon fibre Wolfs to Sydney Motorsport Park, Mark a Tornado and John Paul a Mistral, both Wolfs being placed in the more powerful Class 2, where they will be aiming for lap times several seconds faster than a V8 Supercar.

They will be competing head to head in Class 2 against all the New South Wales Supersports heavyweights; Ryan Godfrey in his equally mind blowing and brand new Ready Set Reline Plumbing Wolf Tornado S, Peter White in his First Neon Radical SR8, Nick Kelly in his also brand new Radical SR10, Alex Kenny in his Juno 2015CN, Class 2 leader Darren Barlow in his Stohr WF1, Steve Roberts in his Austwide Freight Radical SR8, Paul Palmer in his Stohr WF1, Simon Copping in his West WX10, and Aaron Lee in his West WR1000.

And in addition to the Class 2 Supersports racers, Mark and John Paul will have a swarm of the equally fast Class 1 New South Wales Radical SR3 racers to fear, such as all the GWR supported Stephen Champion, Ash Samadi, Sue Hughes, and Brian Walden.

Mark and John Paul have previously raced their spectacular Wolfs at Sydney Motorsport Park, and so all expectations should be that they will be fighting for first place.

The Supersports garages will be thrown open to all visitors at Sydney Motorsport Park on April 9 for Round 2 of the 2022 Industrie Clothing New South Wales Supersports Championship, and everyone will be welcome to get up close and personal with all the high tech Le Mans prototype style Supersports cars.