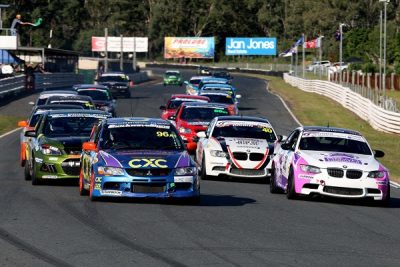 The dream of progressing from state to national-level motorsport will become a reality for the most successful production car outfit in the sunshine state, organisers of the Queensland Production Car Series today announcing an enticing prize for the 2018 champion team.

The overall winners of the series will receive free entry into the Queensland Raceway round of the 2019 Australian Production Car Series, in an arrangement that unifies the relationship between the national and state levels of production car competition.

According to QLD Production Cars category manager Justin Anthony, the prize package – valued at $3,200 plus GST – is designed to promote the nationally-applied production car regulations, while rewarding those who support the state series.

“When the QLD Production Car Series started, our objective was to make the transition from state to national-level racing easy and affordable, and also to make it possible for people to race across different states without modifying their cars,” Anthony said.

“That’s why our technical regulations are the same as both the Australian Production Car Series and the NSW Production Touring Car Championship.

“The production car scene is growing rapidly here in Queensland, and this prize is a way of providing an incentive for those who support the series – we’re very grateful for the support from the APC management team for providing this prize for our series.”

“We see the state series as extremely important – we want it to be strong, because we know that over time, people will move up into the national series,” Sherrin said.

“With the consistency of both technical regulations and car eligibility, we want to make it as easy as possible for people to transition from state to national production car racing.”

The Queensland Production Car Series uses a class-based points system, in which competitors are rewarded for how they perform relative to others in their class, instead of outright race positions.

“With the way the points system is structured, any team in any class has a chance of winning the overall title – it’s about consistency and performing strongly within your class throughout the season,” Anthony said.

“So we’d strongly encourage all Queensland-based production car teams to get their cars out and have a crack – you never know, you might just be racing on the national stage next year!”

The 2018 Queensland Production Cars MoComm Cup kicks off at Queensland Raceway next weekend, with point-scoring rounds also held at Morgan Park and Lakeside.