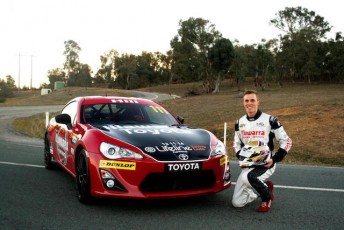 A young Canberra driver who has been described as Australia’s most exciting racing driver prospect in recent years is ready to conquer a new category.

After a brilliant 2015, Cameron Hill and his father Colin are looking to replicate their success in a new category, the all new Toyota 86 Pro-Am Racing Series.

Last year he was the first privateer to win the Formula Ford title in over a decade, catching the eye of Alan Webber, father of Formula One driver Mark.

“I have watched him race and I believe he has all the attributes to make a successful professional career as a racing driver,” Alan said.

The Toyota 86 Pro-Am Racing Series will provide Cameron, with the perfect opportunity to further his career.

“It’s a support category to the V8 Supercars at a high profile event and is on the same television bill as the V8s,” Cameron said. “There’s a fully complimented field of drivers where driver talent shines through, there isn’t much else that can offer such good value for money at this level.”

Supporting Cameron on his first venture in ‘tintop’ race cars is the Illawarra Toyota and Hino dealership group, who are excited and looking forward to being a part of this talented, young driver’s career.

“With my dad growing up in the Illawarra region and having a close association with the area, it made sense for us to approach our friends at Illawarra Toyota/Hino. It’s fantastic that they took an interest and I can’t wait to get on track and repay them with strong results.”

‘We had no hesitation in providing support” said John Oldbury, Group Fleet Manager Toyota Illawarra/Hino. “We are excited to be supporting young talent, and look forward to helping Cameron further his careers and dreams.”

The first round of the Pro-Am Racing Series is at Winton Motor Raceway on May 20-22.

Cameron is also a Lifeline Canberra Ambassador and hopes to encourage and inspire young Australians in crisis to seek help through his motorsport.