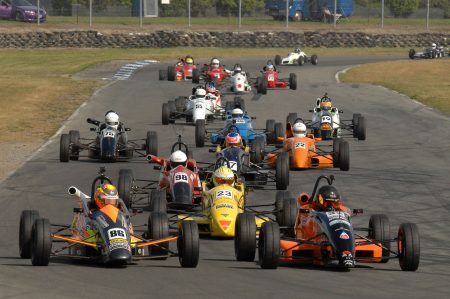 Twenty-four cars will line up on the grid in Timaru on Saturday for the opening round of the New Zealand Formula 1600 Championship. Also doubling as the second round of the South Island F1600 Champs, the one-day event will see more young drivers joining the field, making it one of the best line-ups for several seasons.

It was Auckland’s Josh Bethune that won the opening SI round in Christchurch a fortnight ago, an important three race meeting that many use to prepare for the NZ title fight. It proved to be an ‘arm-wrestle’ between three returning drivers, Bethune from Auckland, Southland’s Jordan Michels, Christchurch’s Bailey Paterson and rookie James Penrose from Rangiora. With Bethune, Michels and Paterson each claiming a race win, it was Bethune’s two second placings that sealed the round win in his favour.

Bethune comes into the season with the aim of retaining his 2017/18 South Island title and winning the national championship. Paterson expects a close fight, “Everyone will be fast, it (Timaru) should be a good round.”

Such is the closeness of the competition that both the national and South Island series are categories where drivers cannot afford to falter. Finishing is a priority, not finishing means a loss of a points scoring opportunity that will see rivals moving ahead in the title fight.

The F1600 category runs three Classes, mainly determined by date of manufacture. With a change in regulations concerning inboard suspension mountings being removed, Van Diemen Stealths’ have moved from Class 1 into Class 2 unless they are racing with three-way dampers.